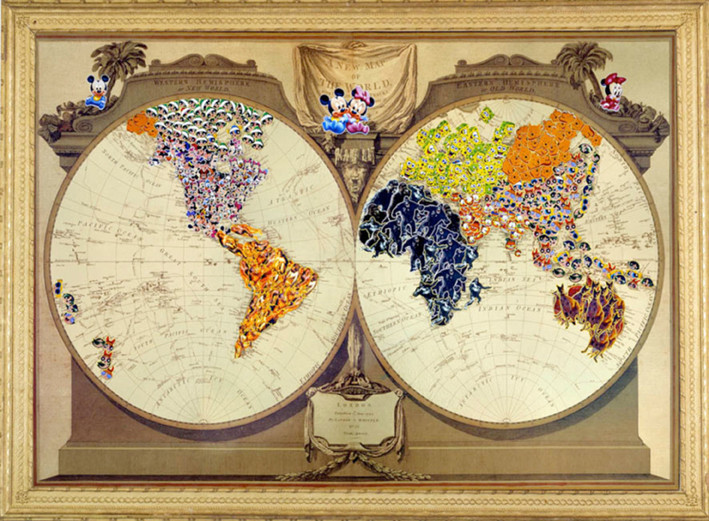 The essential spirit that inspires the work of Nelson Leirner is here: strong political conscience, taken in consideration the political stakes and the refusal of know-how, but also humor and antidogmatisme.
In 1966, with five other artists, he forms the Group Rex, a collective that questions, through exhibitions, actions and debates, the excessive institutionalization of art. In 1967, he takes part in the exhibition New Brazilian Objectivity (Museum of Modern Art of Rio de Janeiro) and is awarded in the IX Tokyo Biennial with the works « Homage to Fontana I and II. » ( which just sold at auction for $ 359.000).
It is easy to imagine how those qualities must have been appreciated in a dictatorship. Till the 70’s the activity of Nelson Leirner has been intense, but confined to Brazil, but it did not stop him. Leirner proposed in 1967, to the 4th salon of modern art in Brasilia, to exhibit a stuffed pork in a light minimal wooden cage. Then he asked publicly in the newspaper “Jornal da Tarde” what are the reasons that made the jury accept the piece, creating a controversy fed by the critics Mario Pedrosa and Frederico Morais, which is famous for “ The happening of the critic”.
After the 80’s, his artistic production was concentrated in the arrangements of manufactured objects. Beyond the “Pop”, this assembly shows faithfully and with irony our global industrial and cultural environment, as “commercial tourism” as “mass commercial tourism”: “even though today my work are not just limited to Brazil, the political problems are still present, this time to the scale of globalization. The commitments are the same. I fight in particular the imperialism of Americans; they take much more than they give, even culturally. (...)
He produces, in 1997, the exhibition « Nelson Leirner, a journey »..., in Rio de Janeiro. He stars exhibiting intensively in Brazil and abroad, in group and solo shows. The works presented in the XVI National Salon, held in 1998 in the Museum of Modern Art of Rio de Janeiro, are apprehended by the judge of the Juvenile Courts for obscenity, a fact which triggers a national campaign against censorship in the visual arts. In the same year, the censored works are presented in the Brito Cimino Gallery, in an exhibition prohibited for under 18 years old.
In the “Big Parades” that Nelson composes, with little sculptures from all origins: religious, ritual, media, political, artistic, sports, all that can start popular devotees can take place, from “David” of Michelangelo to the seven dwarfs of Disney.
The whole work is very fresh: difficult not to think the artist is half his age. That is because Nelson Leirner has a rare quality that he shares with other great artists such as Picabia: always experiment, without ever having certitudes. In 1999 he started a series “Constructivism Rural” rigorous abstract paintings made with animal skins with shades of whites, browns and blacks.
Elegant and almost militant he maintains with the notion of work and production is at the same time hyperactuelle (the situationists, etc...) between Marcel Duchamp and Guy Debord, Nelson Leirner is a invigorating union.
www.gabriellemaubrie.com