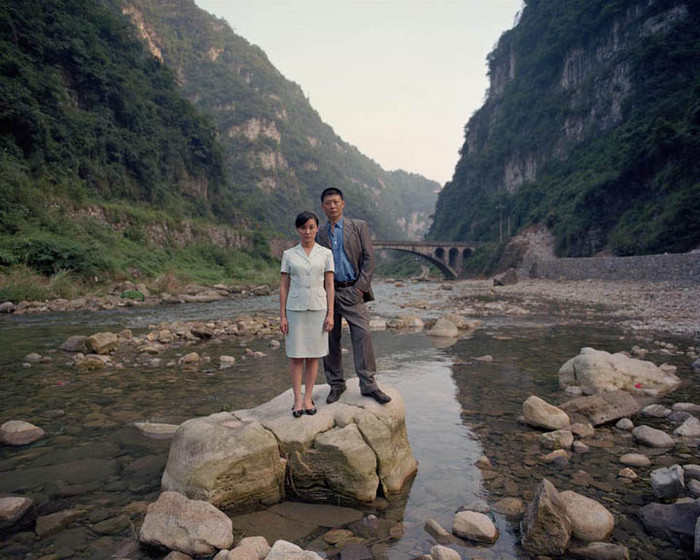 DENNIS ADAMS « AIRBORNE » 2002, born in 1948 in Des Moines, Iowa, U.S.A.
Searching the skies over lower Manhattan since 9/11, Adams has photographed newspapers and plastic bags that he found floating over the city. This lightweight debris becomes airborne from gusts and updrafts generated by traffic, architecture and weather conditions of the city. Suspended in the atmospheric light of changing skies, Adams has captured these isolated urban fragments as potential signs of both memory and prophesies.

KRZYSZTOF WODICZKO « Porte-Parole », 1993-1994 (mouthpiece)
Born in Warsaw, Poland in 1943
The porte-parole (mouthpiece) is an apparatus intended for immigrants. It covers the mouth of the one wearing it like a muzzle. A small video monitor and loudspeakers are installed in the center of the instrument and in front of the mouth of the user. The monitor and the loudspeakers replace the true act of speech by a audio-visual program where ravel in a discontinuous way of the declarations, the questionings and the preregistered accounts, electronically assembled and easy of access. For an immigrant deprived of speech, living in a situation culturally, politically and morally abnormal, it is almost natural to wear equipment for speech, artificial and artistically designed.

ERNEST T. Born in 1943 in Mons, Belgium
The Peintures Nulles (null paintings) are made from the composition of a unique form, a T composed of 6 squares, declined in three colors yellow, blue, red. The surface of the canvas is covered in the fashion of a puzzle without the same colors ever touching.  The artistic paintings are null paintings enlarged with three imperatives:  1/ The form T never appears in full shape  2/ The three colors are equivalent in surface  3/ The canvases are always square  A “consumer information” in the form of a cartel is placed on the right bottom side of each painting. It gives a grade from 1 to 5 to seven elements that constitute a paining (content, equilibrium, originality, pertinence, depth, seduction, sincerity). These subjective appreciations established by the artist, are an answer to his own work. So the cartel, is fully part of the painting. As for the collector, he can bring a solution to a sometimes-difficult choice.

NELSON LEIRNER, “Mapas” 2009, born in 1932 in Sao Paulo, Brazil
The series “Constructivismo Rural” (Rural constructivism) is made from cow skin rugs used by the local bourgeoisie to decorate their country homes or residences in suburban chic. Some parts are rough, others more refined no shortage of charm: the apparent irony of the former is barely noticeable in the latter, which, in fact, may be even more loaded with derision. It is a collective hook to the chin of bourgeois culture, the art system and constructivism (or concretismo) which for an instant collapse. I do not think Leirner have intended to awaken the masses and elites to the resources of the cowhide and physical aspects of natural art, but rather suggested that, once again, to look with fresh eyes the sophisticated art (and it should be remembered that in Greek means falsify sophisticate...). More than skin, it is a skinning. Approaching the Art of Nelson Leirner remains a challenge for the public to the gallery for the office, for the artist himself.

ANTONI MUNTADAS “Ville, Musée” 1991, born in 1942 in Barcelona
City Museum as a series of works that explore the relationship of cities with the cultural industry, tourism and entertainment, also question the function and purpose of the monument, its status in a society where information storage is no longer on stone or bronze of the statue. At what point does architecture become monumental iconography?
In today's cities, museums, exhibitions, conferences, festivals are activities that are part of the entertainment industry, events to disseminate the culture at large and popular in their vocation. How these activities are related to another industry, the tourism-with the characteristics (social, economic, strategic, ...) which are their own, is a dilemma. The dilemma is how culture and the public are linked. A system natural / artificial, where politics and economics speculate on the quantity, profits and ratings.

« The Construction of Fear »is a project produced and first presented in New York and Montreal and now presented in the Gallery Gabrielle Maubrie, Paris. There has been increasing use of the emotion of fear, especially since September 11, 2001. This increase is visible in the representation of fear in the media and politics as a subject but also as a psychological tool.
Through several works Muntadas presented The Construction of Fear in different media and contexts that analyse communication systems responsible for the use and abuse of fear.

SANDRA VASQUEZ DE LA HORRA, drawings, born in 1967 in Chili
At the time of Gender Studies, Sandra Vasquez of Horra offers us a look at the same time raw, sensual, funny, and infinite grace on the Status of Women. A set of drawings on naive waxes hung by pins show a female ready to ride, a saddle on the back, another with breasts where the milk flows, and then a woman who hides under a black blanket, another one climbs a tree, beautiful and voluntary (is this running away? and who is pursuing?), another weary, surrounded by a knot of wrapping paper, allows herself sucked into a black balloon. They have no face. But it is also the mixture of humor and death that hangs around these women, a tragi-comedy series of the Chilean tragedy and mourn with lightness.

PATTY CHANG, “Flotsam, Jetsam” Born in 1972 in San Leandro, California
Flotsam / the part of the wreckage of a ship and its cargo found floating on the water
Jetsam/  Goods cast overboard deliberately, as to lighten a vessel or improve its stability in an emergency, which sink where jettisoned or washed ashore.
Flotsam Jetsam is a journey video that was produced in the Three Gorges area of the Yangtze River in China. The work is concerned with the notion of landscape's relationship to identity, in the midst of the extensive infrastructural changes at the Three Gorges site. The video details the process of fabricating a submarine, launching it below the Three Gorges Dam, following the submarine’s progress along the river and through the dam’s boat locks to the reservoir. Along this journey various performances are enacted: dreams are recounted during psycho-therapy sessions in a swimming pool, a theatrical play is performed in a ship factory, and the actors’ concerns about the process and purpose of making the video are voiced.

RALPH EUGENE MEATYARD, photography, born in 1925 in Normal, Illinois, died in 1972
Ralph Eugene Meatyard was one of only few photographers who had any sort of influence on my « photographic » roots...I believe in his bizarre, fictional world.
-Cindy Sherman
Ralph Eugene Meatyard was born in Normal, Illinois in 1925 and lived in Lexington, Kentucky, where he made his living as an optician. Having developed a serious interest in photography, Meatyard joined the Lexington Camera Club in 1954. Among the members of the club were Cranston Ritchie and Van Deren Coke, both who would become important mentors and inspiring models in Meatyard’s work. Other subjects of Meatyard’s photographs, included members of his own family. His wife, Madelyn and their three children would enact symbolic dramas, set in ordinary, often abandoned places. Working outside the photographic mainstream, Meatyard experimented with multiple exposures, motion blur, and focus. Meatyard’s final series, The Family Album of Lucybelle Crater, completed shortly before he died in 1972, pays homage to his beloved family and talented friends.

BILL OWENS, “Suburbia” 1972, born in 1938 in California
In 1972, while a news photographer for the Livermore Independent, Bill Owens made the photographs that comprise Suburbia. Initially presented in a 1973 volume entitled, Suburbia, they have since been exhibited in museums and galleries in Europe and North America and become the classic photographic description of the American suburban dream. Where some critics have associated Owens' work with the New Topographics school of photography that emerged in the 1970s which attended to the "social landscape" and presented the artifacts and architectures of middle and late twentieth century industrialized cultures, others have placed Owens within the documentary tradition of Diane Arbus, Walker Evans and Weegee (Arthur Fellig). This critical tension is instructive. Does Suburbia render a particular community, Livermore, California or does it depict a social class? In considering this question, it is important to note that Owens began his project after taking a class in visual anthropology at San Francisco State University.

ALEX MACLEAN “The future of the future” 2011, Born in 1947 in Seattle, Washington
For 30 years, Alex MacLean photographs the U.S.A. from an airplane. His images show the formal organizations of extensive farming and aberrations of the development of American suburbs. Driven by a strong environmental concern, he denounces the waste of natural resources, automobile dependence, rising sea levels, the proliferation of waste. This world so organized seems paradoxically to be abandonned, threatening to collapse. His diving views reveal large structures created by man to control nature, to understand the broad outlines of an unlimited expansion and the catastrophe that awaits. They also made up to be beautiful paintings almost abstract.
Recently, the Ministry of Culture has commissioned Alex MacLean a series of photographs of La Defense and the historic axis that connects it to Paris. He held an inventory in which collide the past and present