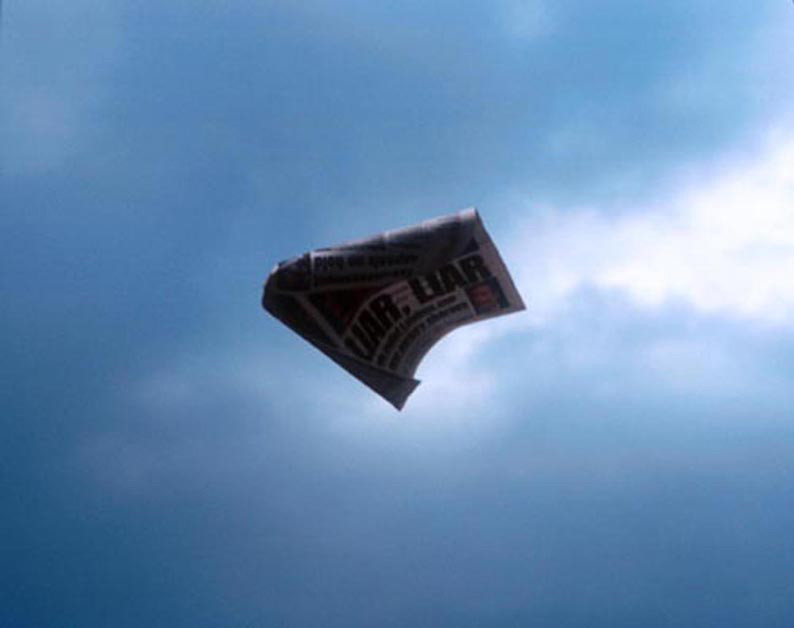 Searching the skies over lower Manhattan since 9/11, Adams has photographed newspapers and plastic bags that he found floating over the city. This lightweight debris becomes airborne from gusts and updrafts generated by traffic, architecture and weather conditions of the city. Suspended in the atmospheric light of changing skies, Adams has captured these isolated urban fragments as potential signs of both memory and prophesy.

GUILLAUME BIJL
Composition:
Almost all my compositions are title “found composition”
This name was born when performing a composition in 1983. The term “Found Composition” is an allusion to the term “found object” already existing, in the sense that it is always in the case of a identifiable composition consciously composed in the style of an object...existing...”as found”. These are fragments of reality, ranging from insignificant fragments consumption and interior décor imitations of public events.

NELSON LEIRNER
The essential spirit that inspires the work of Nelson Leirner is here: strong political conscience, taken in consideration the political stakes and the refusal of know-how, but also humor and antidogmatisme. It is easy to imagine how those qualities must have been appreciated in a dictatorship. Till the 70’s the activity of Nelson Leirner has been intense, but confined to Brazil, but it did not stop him. Leirner proposed in 1967, to the 4th salon of modern art in Brasilia, to exhibit stuffed pork in a light minimal wooden cage.

MARCO ROUNTREE
Marco Rountree is an autodidact. He began his artistic career in 1996, making graffiti in Canada and Mexico.
In his work, Rountree appropriates residues of today’s culture, the reuse of images, garbage in the streets, with the aim to explore the dynamics of contemporary societies and cultures.
Marco Rountree described his artistic practice as “ how to give importance to objects, bringing them home and treating them as decorations”. This taste for surprising combinations and visual ornamentation has its roots in his past as a graffiti artist.
More recently Rountree continued this theme with installation of books in which he folded the pages, depriving the books of their function and turning them into aesthetic objects.

CHRISTIAN MARCLAY
Born in 1955 in San Rafael, California, U.S.A
Over the past 30 years, Christian Marclay has explored the fusion of fine art and audio cultures, transforming sounds and music into a visible, physical form through performance, collage, sculpture, installation, photography and video.
“CONK” 2006 is a print made from onomatopoeic words that he torn from comic books and collages before scanning and reprinting them at a large scale. Onomatopoeic words, with their huge letters and strings of unbroken vowels, blaze across the page at decisive moments in every superhero’s escapade, yet their forceful presence remains silent until interpreted and read aloud. Marclay treats these chunky words like objects, creating collages that emphasize the materiality of the paper and the ink of the original comic book. Removed from their narrative context, the words fizz with random violence and barely contained energy.

HRAFKELL SIGURDSSON
In his most recent works Hrafnkell Sigurdsson frequently treats topic of the wasting while referring with packing, this sign obvious of the consumer society.
Associations are multiple, even if nothing in his works can be of only one significance. The wrapping paper sends us back directly to Freud, in his “Faintness in the Civilization “ of 1929. Scattered papers, that littered the paths of the Viennese forest and that the psychiatrist took as a sign incompatible with a civilized state, but nevertheless the most evident signs of our civilization. Perhaps it is sad, but although it is in waste that we are above the other animals. The one who fills the fastest the garbage dump is the most estimated and consequently the most civilized.