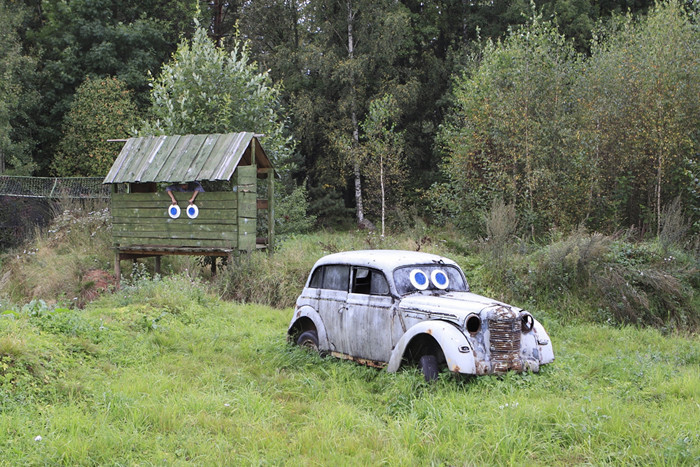 Caution: Théo Mercier is too changing, being in turn all and it’s opposite and never during for a long time*...

He is a young man in a hurry, who worked in the workshop of Matthew Barney (can you imagine a more formative hearth?). But he is also an artist who proceeds by sedimentation; in his workshop named in irony « Byzance », his finds in the flee marked haunt his daydreams and penetrate in his spirit as his hard rock motifs parasitize his rectified carpets.
In this exhibition, we will maybe see, if time authorizes it, « petrified » compositions left by him in the granite caves in Auvergne dug by man 2 000 years ago, where, bathed permanently by a calm flow of a tepid source hyper mineralized, that they never finish to be solidified.

Théo Mercier is an invaluable aesthete, Byronic, wildien, fond of naturalized animals, especially poisonous, or morbid. But at the same time he puts bananas between the jaws of human skulls and arranges as a virtuoso accumulations of junk food, fries, hamburgers, donuts with frosting, fatty salamis et apples of love.
Undoubtedly, the excess of the opera bathes his scenography where death is stretched indefinitely: in his PLACES OF MEMORY, out of an ordinary ritual, stones are on top of deathbeds and coffins covered with colored goldbeaters skins. But it is however the extravagance all Latino of an electric guitar Ibanez blue metallized, or the imagery very heavy metal of a carbonized motor bike flanked of an impeccable blonde wig, which irradiates the ensemble of this very intense work, all in dissonances and in harmonic disjunctions.
In two dimensions as in three, Théo Mercier operates by collages of elements strongly heterogeneous, and even a priori irreconcilable. Each time, the new image thus created finds its coherence in a strong unifying principle: subtle manipulation of (mono) chromic for MAGIC LOOSERS AND ESOTERIC MISTAKES, systematic dissimulation of the faces behind masks for LOST WORKERS, atmospheric drowning in the smoke-producing one for PLACES OF MEMORY and SHIT AND SHINE (survival kit), or unconditional addition of de pupils in the landscape for EYES CONTACT.

Théo Mercier is autodidact in everything. Obviously the music, literature, designer, cinema, but nothing dominates. At merely 25 years old he could be satisfied to have talent (for many it would be already a lot); better than that, he has a part of grace, this unperceivable coup nudge of chance that will guarantee him “good fortune “, to repeat the term of Olivier Saillard for him. The work of Théo Mercier is undoubtedly full of spirit, humor, lightness, gravity, elegance, invention, charm, poetry, lucky finds, surprises, grindings, plural directions... i.e. great future.

* This description is the self-portrait of Lord Byron...
www.gabriellemaubrie.com