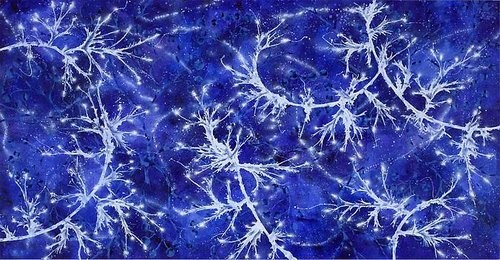 Opening reception for the artist: Thursday, March 18th, from 6 to 8 pm

Gagosian Gallery is pleased to present an exhibition of recent paintings by Alberto Di Fabio.

Di Fabio's work is inspired by the fundamental laws of the physical world, as well as organic elements and their interrelation. His paintings and works on paper merge the worlds of art and science, depicting natural forms and biological structures in vivid color and imaginative detail. Throughout his abstract images, he has developed and expanded his interest in the natural world. In his early paintings, he examined the structures of flora and fauna, as well as eco- and astral systems, moving on to the study of genetics, DNA, and the synaptic receptors of the brain, and the realm of pharmaceutical and medical research.

In his latest work, Di Fabio investigates the perennial human fascination with the relationship between art and the cosmos, addressing the laws that regulate chaos in the universe, such as the theory of relativity and quantum theory. Di Fabio cites a broad range of influences and inspirations from Italian Futurist Giacomo Balla, to post-war modernists such as Enrico Castellani, Lucio Fontana, and Robert Ryman. Speed of Light (2009), for example, represents light rays in minimal form, meditating on the vastness and infinity of the medium. In this new series, Di Fabio expands his vision into meticulous detail using dots and strips of acrylic paint to interrupt the spatial field of the painting. Each of the multiple centers of the composition serves as both a cognitive and visual cue.