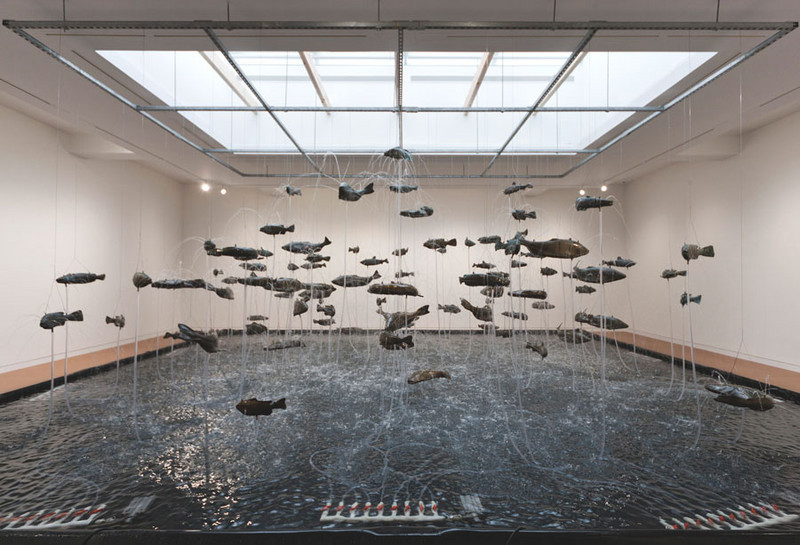 Gagosian Gallery is pleased to present One Hundred Fish Fountain by Bruce Nauman.

Since the 1960s, Nauman's radical interdisciplinary approach has challenged conventions while producing new methodologies for making art and meaning. Body and selfhood, the role of language, the phenomena of spatial awareness, and the relationship between artistic process and viewer participation are recurring themes in his art. His rigorous and spare approach to existential questions of life and death, love and hate, pleasure and pain, has embraced many mediums including performance, video, holography, installation, neon, sculpture, and drawing. From the forms and attitudes that he invented in Post-Minimalism and Conceptual art to his most recent sound installations, a series of themes and ideas consistently appear: the use of the human body as material; the relationship between art and language; and such dichotomies as concealment and revelation via the exploration of positive and negative space.

As the title states, One Hundred Fish Fountain (2005) comprises nearly as many hollow bronze fish, cast from nature and suspended in the air on wires, as if swimming in deep water. Below them is a shallow basin, deftly cobbled together from rubber sheeting, which measures 25 feet by 28 feet. The environmentally scaled sculpture all but fills the room, allowing just a narrow track for the viewer to edge around the perimeter, in much the same way as Nauman's early corridor works first invited then restricted movement.

Some of the fish are set just a foot or two above the basin while others hang as high as ten feet, creating a loose topological structure. Water is pumped intermittently into each of them via snaking intravenous tubes. Once the fish fill up with water, they spurt energetically via random perforations. The thousand or so rivulets of water thus produced create an effusive aural and visual din that imparts to the work the humid force of a natural waterfall. The fountain runs like this for fifteen minutes, shuts down for two, and then the cycle begins anew. As the pumping ceases, the water slows to a drip until it ceases altogether. The draining water is caught in the basin beneath, where it is reticulated so that the process can resume. During the passive period, the noise and activity all but cease; what had been an exuberant spurt slows to a deathly drip until the pump kicks back in and life returns.

A native of the American heartland, Nauman has rarely cited it as an overt influence, however, he has acknowledged that One Hundred Fish Fountain is rooted in his memories of boyhood fishing expeditions with his father. The fish that make up this extraordinary ensemble are the kinds that he used to catch all those years ago—catfish, bass, whitefish and so on. All those employed in the casting of this nature morte were caught in the Great Lakes by Nauman and his friend and dealer, the late Donald Young, thus anchoring this unique and poignant work even more firmly to the locus of autobiography.

One Hundred Fish Fountain also recalls the exhilarative air of Nauman's seminal Self-Portrait as a Fountain (1966–67), his corporeal riposte to Marcel's Duchamp's game-changing readymade. But by re-visiting the prank of his artistic youth and transferring the irreverent gesture into the terms of monumental sculpture and ecological metaphor, he also grants the viewer a visceral immersion in the systole and diastole of time and memory.