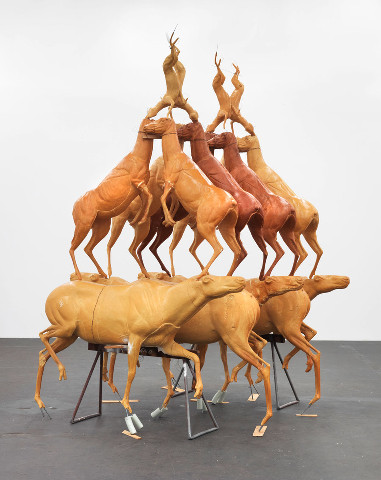 Since the 1960s, Nauman's radical interdisciplinary approach has challenged conventions while producing new methodologies for creating art and meaning. Body and selfhood, the role of language, the phenomena of spatial awareness, and the relationship between artistic process and viewer participation are recurring themes in his art. His rigorous, ascetic approach to the existential dichotomies of life/death, love/hate, pleasure/pain has embraced performance, video, holography, installation, sculpture, and drawing. From the attitudes and forms of his Post-Minimalist and Conceptual work to his most recent sound installations, persistent themes and ideas appear: the use of the body as material; the relationship between image and language; and the generative interaction of positive and negative space.

In 1988, after a hiatus of nearly two decades focused on time-based media, Nauman resumed his work with cast objects. But rather than casting empty space or human forms as before, he turned to readymade molds—in this case, taxidermy molds used in preparing stuffed animals, which he first saw in a local taxidermy shop then procured from a mail-order catalogue.

Animal Pyramid is a stack of seventeen taxidermy molds rising to twelve feet. The carnivalesque arrangement of these alien creatures made out of amber-hued polyurethane evokes the dichotomy of nature and sport: four upside-down foxes crown graduated rows of deer and caribou, eerily featureless—even ambiguous—without their prized pelts and horns. The entire ensemble is visibly cobbled together with wire, the work of a morbid puppeteer. Like the preceding work Carousel (1988)—where dismembered taxidermy forms hang and drag from a steel axis that turns in an agonizing danse macabre—Animal Pyramid disturbs with its vision of carnage submitted to an artificial and bloodless geometric order.

The work’s stemmed violence also probes the unsettling gap between real and surrogate, a common cultural obsession from the fetish objects of West Africa to the dismembered mannequins of Hans Bellmer and Cindy Sherman, and Maurizio Cattelan’s melancholy take on the Bremen Town Musicians. With Animal Pyramid, Nauman's meditations on the fraught human condition within a larger world ecology take shape in the very materials by which living nature is transformed into still life.

In 1990, the Greater Des Moines Public Art Foundation commissioned a cast bronze version of Animal Pyramid. It is installed in the grounds of the Des Moines Art Center, Iowa.