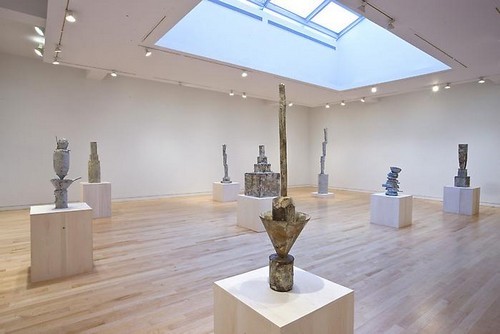 
Bronze unifies the thing. It abstracts the forms from the material. People want to know about what the material constituents are; it helps them identify the work with something. But I want each sculpture to be seen as a whole, as a sculpture.
--Cy Twombly

Gagosian Gallery is pleased to announce an exhibition of new bronze sculptures by Cy Twombly. This exhibition will coincide with the inauguration of Gagosian's Athens gallery with an exhibition of new paintings by Twombly entitled "Leaving Paphos Ringed with Waves". Two major museum exhibitions, "Cy Twombly: The Natural World, Selected Works 2000-2007' that inaugurated the new wing of The Art Institute of Chicago, and "Cy Twombly: Sensations of the Moment" at Museum Moderner Kunst, Vienna, run through October 2009.

Since 1946 Twombly has fashioned sculptures from everyday materials and objects, usually painted with white gesso. In 1979 he began casting some of them in bronze, thus unifying, preserving, and transforming them into cohesive wholes, independent from the original bricolages. The surface and patina of these cast bronzes evoke weathered artifacts that have been exhumed from the earth, an effect that is heightened in those that have been coated in white oil paint.

Some of these sculptures contain allusions to the static, closed forms of Egyptian and Mesopotamian sculpture, as well as to other architectural and geometric references such as the repetition of rectangular pedestals and circular structures. Others refer to historical representations such as Untitled (The Mathematical Dream of Ashurbanipal) (2000-2009), an allusion to the scholarly Assyrian king whose military prowess was the subject of a rival king's dream in which his eventual submission to Assyria was predicted. While the components of these sculptures have been partially merged and abstracted by the casting process, in works such as Untitled (2004-2009) a progression of precariously balanced objects is clearly demarcated, in this case a broom inside a funnel that rests on a cylindrical pedestal. Twombly's continued play between fragility and obduracy, figuration and abstraction, ancient and modern imbues each work with its characteristic tension.

The exhibition will be accompanied by a fully illustrated catalogue with an essay by Kate Nesin.

Born in 1928 in Lexington, VA, Cy Twombly studied art at the School of the Museum of Fine Arts, Boston (1947–49); the Art Students League, New York (1950–51); and Black Mountain College, NC (1951–52). In the mid 1950s, following travels in Europe and Africa, he emerged as a prominent figure among a group of artists working in New York that included Robert Rauschenberg and Jasper Johns. In 1959, Twombly settled permanently in Italy. In 1968, the Milwaukee Art Center mounted his first retrospective. This was followed by major retrospectives at the Kunsthaus Zürich (1987) travelling to Madrid, London and Paris; the Museum of Modern Art, New York (1994) (travelling to Houston, Los Angeles, and Berlin) and the Pinakothek der Moderne in Munich (2006). In 1995, the Cy Twombly Gallery opened at The Menil Collection, Houston, exhibiting works made by the artist since 1954. The European retrospective "Cy Twombly: Cycles and Seasons" opened at the Tate Modern, London in June 2008, with subsequent versions at the Guggenheim Bilbao and the Museum of Modern Art in Rome in 2009.
"Cy Twombly: The Natural World, Selected Works 2000-2007" is on view at The Art Institute of Chicago, concurrent with another major survey "Sensations of the Moment" at the Museum Moderner Kunst Stiftung Ludwig, Vienna. Both exhibitions run until October 11.