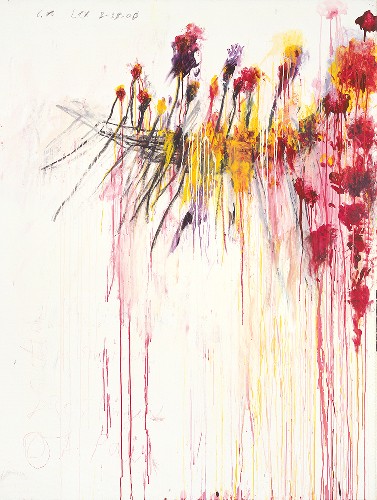 The past is a springboard for me. . . . Ancient things are new things. Everything lives in the moment, that’s the only time it can live, but its influence can go on forever.
—Cy Twombly

Gagosian is pleased to present Coronation of Sesostris, Cy Twombly’s epic painting that was shown for the first time at Gagosian 980 Madison Avenue in 2000. The exhibition coincides with “In Beauty it is finished: Drawings 1951–2008,” at Gagosian 21st Street, the first career-spanning presentation of Twombly’s works on paper.

Coronation of Sesostris (2000) is a painting cycle in ten parts. Begun in Gaeta, Italy, and completed in Lexington, Virginia, it combines Twombly’s graphic inventiveness and poetic sense of history, rhythm, and elision.

In his Histories, Herodotus recounts the conquests of the Egyptian pharaoh Sesostris, who led an army northward overland to Asia Minor, fighting his way westward until he crossed into Europe, where he defeated the Scythians and Thracians. In Twombly’s interpretation, this war-making, world-building ancient figure is a given fantastical meta-narrative, depicted in the arc of a single blazing day in Egypt from sunrise to journey’s end.

The cycle begins with a cursory depiction of the red sun—the pharaoh himself—which, as it moves around the room and across subsequent canvases, takes the form of a wheeled chariot (Twombly’s ideograph for military conquest) and is then carried by a boat. Further along in the sequence, boats with multitudes of oars are drenched in yellow, orange, and purple, suggesting the glory of victory. The sixth panel incorporates a 1996 poem about the departure of the gods by the American Southern poet Patricia Waters, adapted and scrawled in a barely legible script in red pencil, framed by blotches of dripping red paint.

In a rhythmic orchestration of pictographic signs, scratchings, expressionistic painting, and literary fragments, the series progresses from poetically exalted delirium to morbid meditation. Twombly often erased the distinction between line and mark, drawing and painting. The pencil scribbles, the smudges and smears, are the marks of an affective body, used as a writing instrument. Lines, phrases, and symbols function like inscriptions to create genealogies and fields of allusion. Toward the final panels, the sumptuous color gives way to stark black on white, with half-obscured lines from Sappho: Eros, weaver [of myth], Eros, sweet and bitter, Eros bringer of pain—Sesostris’s coronation is also his death, as the burning orb flames out on its way across the sky, disappearing with the boat, that mythological transport to “the other side.”

Also on view will be photographs by Sally Mann, of Twombly’s studio in Lexington, Virginia, allowing a glimpse of Coronation of Sesostris in progress, from Mann’s series Remembered Light.

A fully illustrated catalogue will accompany the drawings exhibition, “In Beauty it is finished: Drawings 1951–2008.” The catalogue raisonné of drawings will be available for sale at Gagosian Shop and through Gagosian, as will the original “Coronation of Sesostris” catalogue, from 2000.