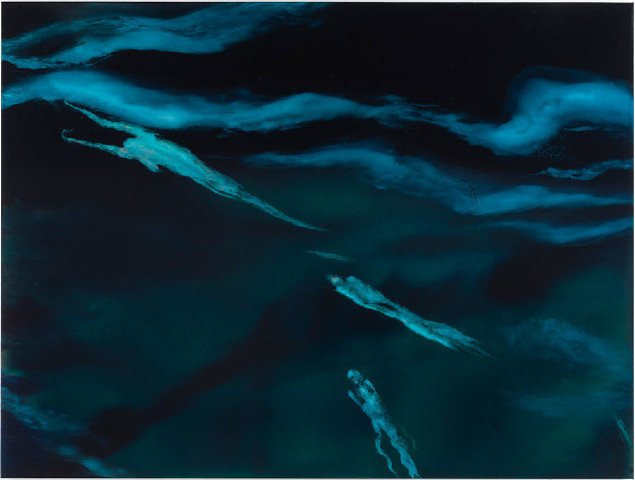 I wanted these paintings to reveal themselves during the making, similar to how the trash paintings came to be. I was thinking about alchemy. So there's this juggling act; I'm starting and often ending with an image, but the oil paint and the process of using that oil paint will open up the possibility for the artwork to take a new direction.
—Dan Colen

Gagosian is pleased to announce an exhibition of new paintings by Dan Colen.

The Miracle paintings continue an investigation that has been central to Colen's practice from the outset: to what extent does art come from the artist, and to what extent does it arise from forces independent of the artist? In his earliest paintings, Colen labored over precise oil renderings of banal interiors—a sloppy apartment bathroom, an adolescent bedroom, a camping tent—into which he introduced the presence of the supernatural—the Blue Fairy, Jesus Christ, twinkling cherubs, his deceased grandfather. He describes the subsequent series of Candle paintings as “portraits of God.” In these works, the space of the canvas contains the space of Geppetto's worktable—where Pinocchio transcends his materiality to become real—and a message appears in the smoke left by a just-extinguished candle flame.

In 2006, Colen started to make paintings with chewing gum instead of paint, ushering in a long period during which he traded representational subject matter for an exploration of the medium itself. Using flowers, dirt, grass, tar and feathers, Mylar confetti, street trash, and readymade metal studs, he relinquished his controlling approach to painting, instead allowing the final result to be guided in large part by the behavior of the given material. He commented that he found the loss of control exciting, as if the paintings were taking on "inevitable forms—almost like destined forms."

Following these discoveries, in 2011 Colen began the Miracle works with a new relationship to the intrinsic properties and potential revelations of oil paint itself. Like the Candle paintings, he bases the Miracle paintings on Disney stills—in this case, from the mythic Fantasia—as a means to tap into the animation giant's stronghold on our collective imagination. The vignettes that comprise Fantasia pair symphonic musical compositions with animated sequences that move fluidly between abstraction and representation and address such themes as creation, doom, and the alluring but evasive power of sorcery. Instead of the quotidian spaces of his early works, the Miracle paintings—which measure up to ten feet in width—depict an entirely fantastical realm in which unseen agents cast magic spells, phantasms rise from the murky abyss, and depth implodes in a cloud of dust. Colen applies pigment and medium, in some sense, to echo this inchoate subject matter; bursts of powder, puddles of liquid, and raking pulls and pushes made by tilting the canvas back and forth constitute a spectrum of alchemical painterly acts—some developed through exhaustive studio trial, others evinced outside of the artist's intention. These are aptly magical atmospheres for Colen's continuing search for the painterly sublime.