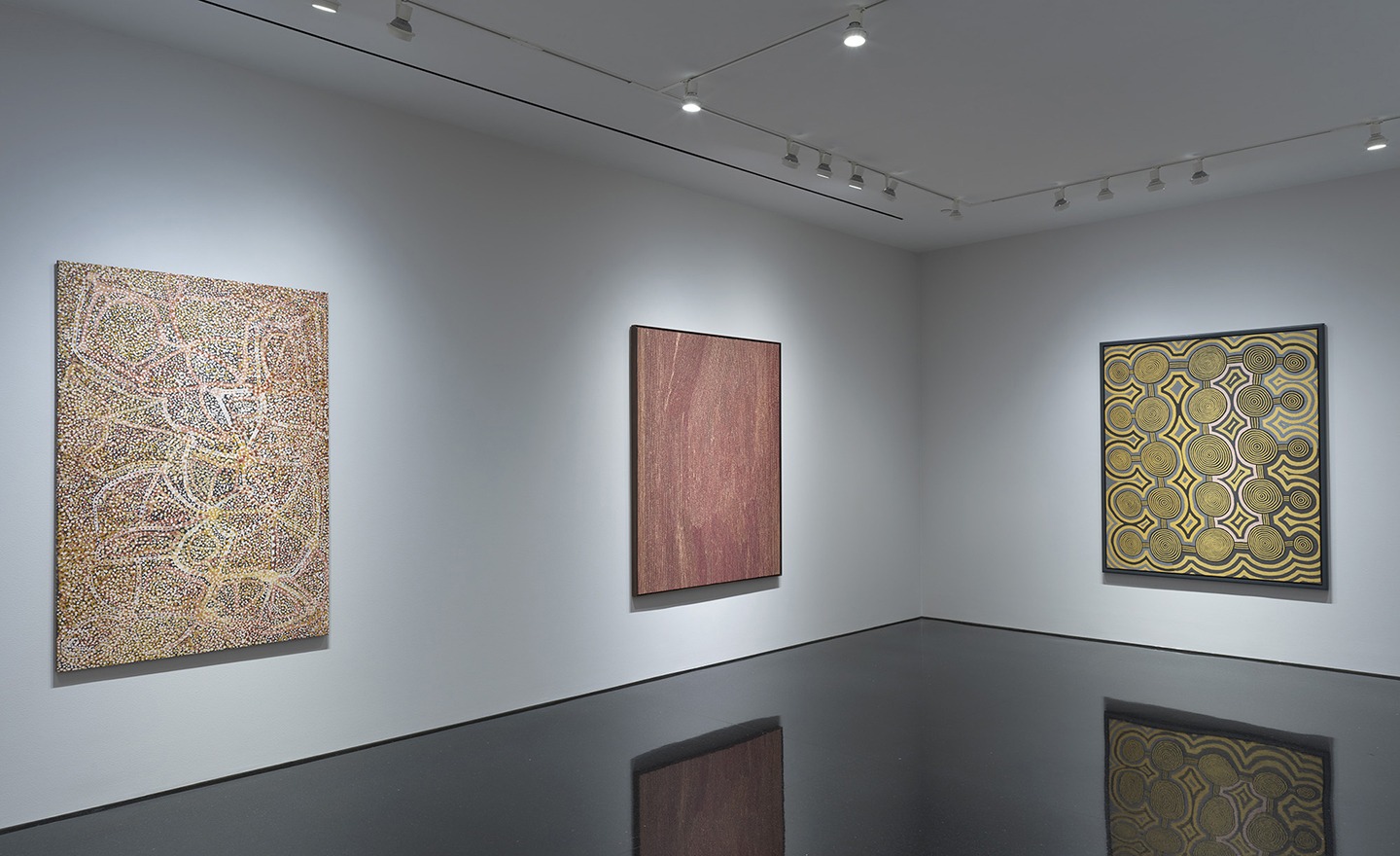 Indigenous people have lived in the remote Australian deserts for many thousands of years. In the late 1960s, the Australian government moved several communities from the Western Desert region—primarily Pintupi, Luritja, Warlpiri, and Arrernte peoples—to the Papunya settlement, about 150 miles south of Alice Springs in the Northern Territory. This forced displacement inadvertently created a new hub for Indigenous Australian art where members of the community were encouraged to paint first murals, then works on canvas, using the patterns of sand art and ceremonial body decoration. This initiative set in motion the visual transposition of ancient stories and traditions into paint on canvas, giving the Papunya Tula artists an opportunity to reexamine the imagery and present their culture to outsiders through transcendental visual codes. Informed by a lifetime of learning, these paintings thus represent an invaluable archive of Indigenous knowledge.

Many of the works in this exhibition, made during the last twenty years, reveal the ways in which subsequent generations of Indigenous Australian artists have responded to their progenitors, and attest to the increasingly prominent role of women artists among them. While the first Western Desert paintings directly depicted signifying symbols and ideograms, the Papunya Tula artists later sought to obfuscate overt references, dotting and over-dotting as a means of protecting sacred designs. This strategy of simultaneous exposition and concealment yielded unparalleled visual feats, as each artist presented a continuum between states of waking and dreaming, ephemerality and permanence, representation and direct experience.

The dotting technique is exemplified in an untitled painting from 2001 by Willy Tjungurrayi (1932–2018), one of the few remaining artists of the first generation. Small whitish spots create an undulating terrain over a dark ochre ground, referring to Kaakurutintjinya (Lake Macdonald), a dry salt lake that features in ancestral stories of young male novices traversing the landscape. In George Tjungurrayi’s (born c. 1947) and Warlimpirrnga Tjapaltjarri’s (born c. 1958) charged rectilinear compositions, tight concentric lines create mesmerizing effects, like the direct retinal experience of water or contoured earth shimmering in the sun.

Some paintings refer to sites of sacred or historical significance, acting as maps of real space as well as the liminal realms of memory and dreams. In an untitled painting from 2010, Naata Nungurrayi (born 1932) depicts Karilywarranya in the Pollock Hills, where she grew up. Clusters of red, orange, and yellow dots form a sort of aerial view, and winding lines and coils refer to ancestral pythons, local topography, and vegetation. Yukultji Napangati’s (born 1970) painting, Ancestral Women at Marrapinti (2017), concerns the women who stopped at symbolic sites to make bone jewelry for young women in their rite of passage.

In her brief but prodigious artistic career, Emily Kame Kngwarreye (1910–1996), an Anmatyerre elder from the Central Desert area, also focused on women’s activities, from batik making to the harvesting of seasonal crops. The freedom of her virtuoso stylistic approach ranges from the delicately pixelated fields of color and structure in Hungry Emus (1990) to the wild and urgent brushstrokes of Kame Yam Awelye (1996).

Despite evident resonances with mainstream abstraction, Indigenous Australian art emerges from a fundamentally different line of inquiry. Rather than reacting to formal and conceptual tendencies from which they remain largely isolated, the Desert painters condense innumerable layers of history and lived experience into a dazzling diversity of visual languages, connecting contemporary viewers to the most ancient surviving culture in the world.