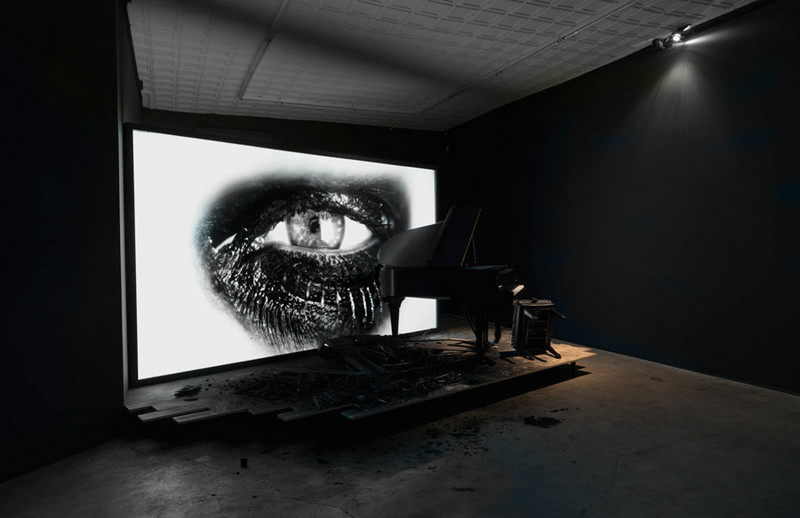 I think it's supposed to be about provoking enough of a memory that people take it away and do their own thing with it. For me, artwork... is something that you should be able to take away—you don't have to be present in front of it, and that's the potency of the artwork when it works.
—Douglas Gordon

A conjurer of collective memory and perceptual surprise, Gordon's tools include commodities and mechanisms of everyday life. Into a diverse body of work—which spans video and film, sound, photographic objects, and texts—he infuses a combination of humor and trepidation to recalibrate reactions to the familiar. Key examples include 24 Hour Psycho (1993), in which he slowed down Alfred Hitchcock's legendary film into a full day's duration, attenuating the horror until any sensation of suspense ceased to exist; and the feature film Zidane: A 21st Century Portrait (2006, with Philippe Parreno) in which multiple cameras tracked every action and emotion of the French soccer star during a decisive game.

In Phantom (2011), Gordon, collaborating with singer/songwriter Rufus Wainwright, examines grief and longing in a sonic and visual requiem. Expanding upon his use of portraiture as a tool for investigating the human condition, Gordon employs slow-motion film produced with a high-speed Phantom camera. The film focuses on Wainright's eye—blackened with make-up, weeping, and glaring back at the viewer, echoing melodramatic performances by stars of the silent screen. On stage in front of the screen, a baby grand piano stands over another piano that has been burnt to ashes—a recurring symbol for Gordon that here might allude to the cyclical nature of life. Meanwhile Wainright's voice, accompanied by resigned piano chords, permeates the space during the daytime, while in the evening his silent gaze looks out plaintively at passersby on Park Avenue. The death of Wainwright's mother inspired the 2010 album All Days Are Nights: Songs for Lulu, the soundtrack for this installation, and its opening track, “Who Are You New York?,” is a direct engagement with visitors and their surroundings. Gordon foregoes any specific narrative for poignant emotional triggers that sharpen over the passing minutes, transforming the gallery into an afflictive mise-en-scène that resonates differently with the experiences of each viewer.

Gordon lives and works in Berlin and Glasgow.
www.gagosian.com