A Lifetime in Surf 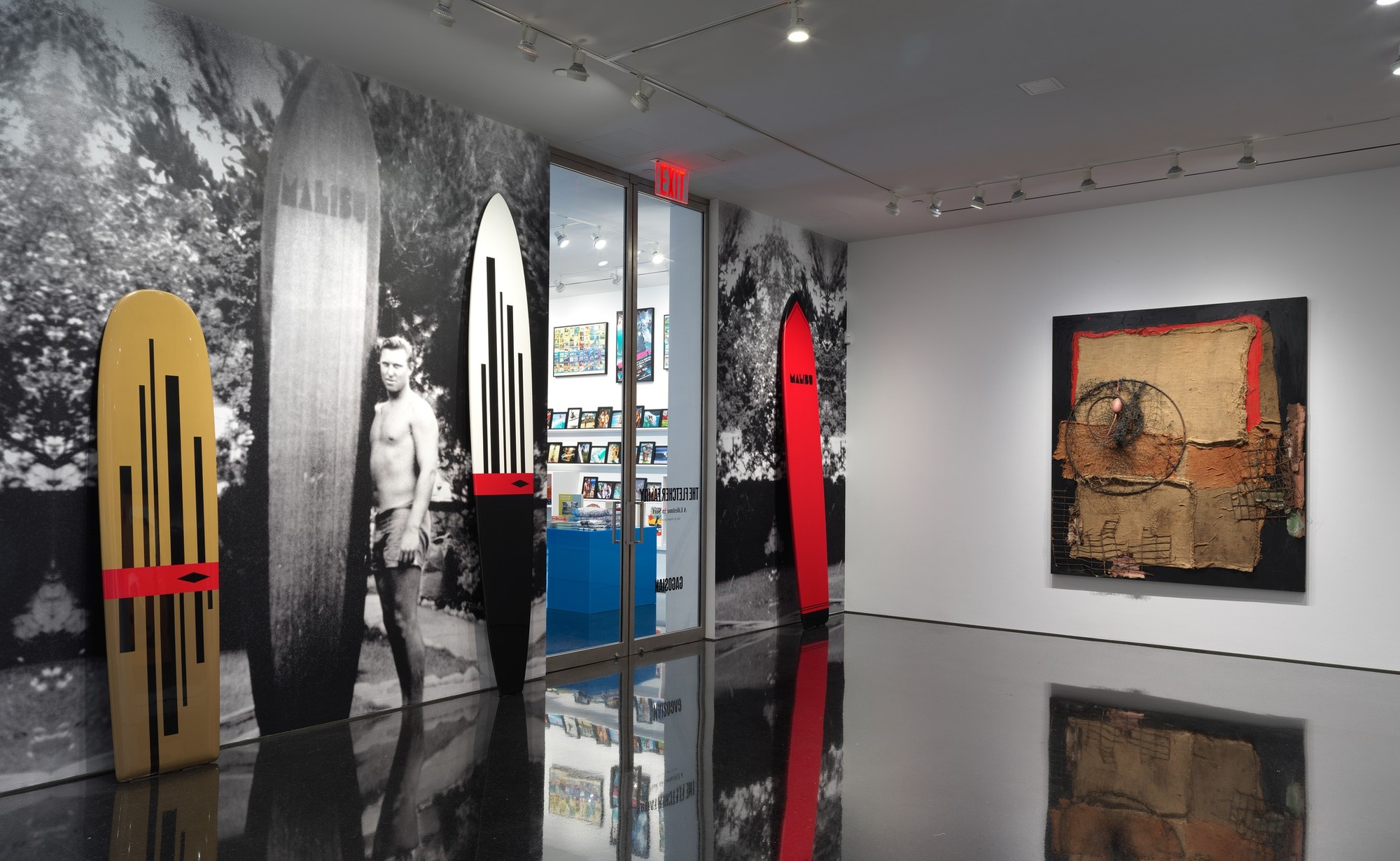 The practice of the artist . . . is no different than that of the surfer, who inscribes his or her self in the ocean—a bigger canvas could not be engaged, defining their humanity in the most personal way, using themselves to draw their lifelines through the massive fleeting freedom of that power. The power and majesty of the sea—Herbie shared that with me and with my family as well as his own.
—Julian Schnabel

Gagosian is pleased to present an exhibition celebrating the publication of Fletcher: A Lifetime in Surf by Rizzoli in 2019.

The legendary Fletcher family has been an institution and guiding presence in surf and skate culture for decades, with an influence that extends to the worlds of fashion, music, streetwear, and art. Now, Fletcher: A Lifetime in Surf, written by Dibi Fletcher—wife of Herbie and matriarch of what Esquire has called “surfing’s first family”—simultaneously traces the evolution of the Fletcher family’s life and offers an oral history of surfing’s counterculture from the 1950s to today.

Throughout the volume, the family’s intimate storyline is augmented with anecdotes from luminaries including surfing legend Gerry Lopez, Mike Diamond of the Beastie Boys, artist Julian Schnabel, eleven-time world champion pro surfer Kelly Slater, and Steve Van Doren, of the Vans skate shoe company. Dibi’s recollections begin with her childhood memories of her father, big-wave surfing pioneer Walter Hoffman. She then goes on to narrate her union with Herbie, as well as the lives of their sons Christian and Nathan, both surfers, and their grandson, Greyson, a renowned skateboarder, all of whom have erased the boundaries between surfing and skateboarding.

To commemorate the publication of the book, Gagosian will install artworks from four different series by Herbie Fletcher at 976 Madison Avenue. Fletcher’s Wrecktangles are large sculptures made from once-perfect, custom surfboards that have been ridden and broken by the greatest contemporary tube riders at the Banzai Pipeline in Hawaii. For years now, elite surfers, known as “Wave Warriors,” have saved their boards to be made into Wrecktangles. The accumulated boards tell oblique stories about the culture of surfing.

The board recurs in the Wall of Disaster series, which features masses of skateboards mounted to the wall in anarchic accumulations. Similar to their surfboard counterparts, they form a cacophony of logos and images.

In his Blood Water paintings, Fletcher uses mineral-rich earth from the Waimea River, Hawaii. After the winter rains on the North Shore of Oahu have subsided, he paddles up the river with large pieces of untreated canvas on the nose of his surfboard, staining them in the iron-oxide-rich red earth washed down from volcanoes. After they are completely saturated, he paddles back to the coral sand beach and lays the canvas out to dry, creating visions reminiscent of ancient petroglyphs. Similarly, in his Connecting to the Earth paintings, Fletcher affixes found objects from the Hawaiian shores such as netting, and burlap used to carry taro, to the canvas, paying homage to native Hawaiian traditions.

Alongside these works will be an installation of ephemera—including photographs, posters, sketches, maps, surf magazines, boards, and memorabilia—accumulated from the family’s life of surfing. Gagosian Shop will also feature magazines, T-shirts, limited-edition skate decks, surfboards, and other items linked to the Fletcher family, including a Gagosian/Fletcher designed T-shirt to commemorate the exhibition.

Gagosian will also screen the film Heavy Water, released in 2019, a documentary about Nathan Fletcher, at 7pm on Monday, July 29, at Guild Hall, East Hampton, with an introduction by Julian Schnabel.