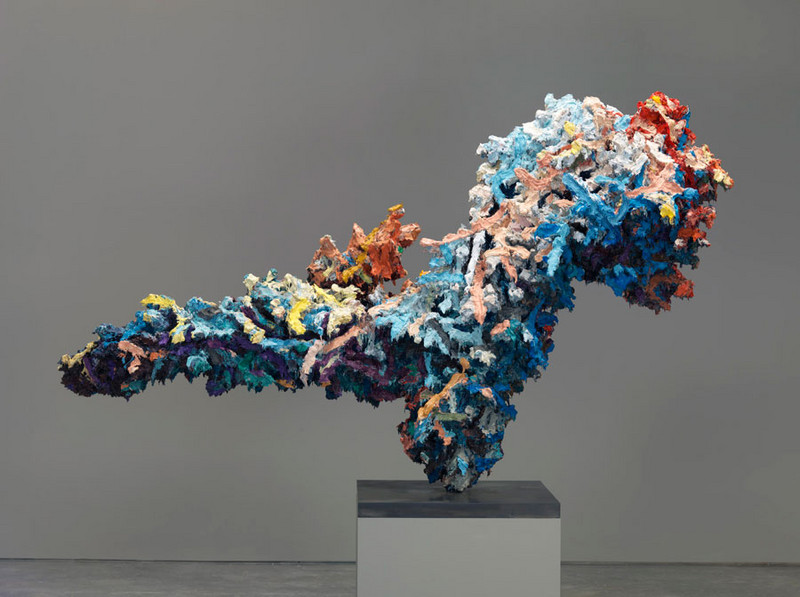 I like my paintings to have one foot in the grave, to be not quite of this world. For me they exist in a dream world, a world that is made up of all the accumulated images stored in our subconscious that coagulate and mutate when we sleep.
—Glenn Brown

Gagosian New York is pleased to announce an exhibition of recent paintings and sculptures by Glenn Brown. This will be his first solo exhibition in New York since 2007.

Mining art history and popular culture, Brown has created an artistic language that transcends time and pictorial conventions. His mannerist impulses stem from a desire to breathe new life into the extremities of historical form. Through reference, appropriation, and investigation, he presents a contemporary reading of images new and remembered. Borrowed figures and landscapes are subjected to a thoughtful and extended process of development in which they gradually transform into compelling, exuberant entities. In sophisticated compositions that fuse diverse histories—the Renaissance, Impressionism, Surrealism—Brown creates a space where the abstract and the visceral, the rational and irrational, the beautiful and grotesque, churn in a dizzying amalgamation of reference and form.

In paintings completed over the last three years, including some of his largest works to date, Brown confronts traditional subjects of still life and portraiture. With characteristically fleshy textures beneath remarkably flat and glossy surfaces, the scenes evoke traditional memento mori. Measuring over ten feet in width and taking the title of Salvador Dalí’s 1936 painting, Necrophiliac Springtime (2013) is a meticulous arrangement of decaying yet inexplicably steaming flowers made giant against the backdrop of a haunting landscape, their intense aroma suggested by diaphanous wisps curling into the night sky. Through scrutiny and amplification, Brown displaces motifs from their original context. Acidic, elongated portraits of elderly, saintly men are unnatural yet familiar. A reclining nude is turned on its end, while a succulent piece of meat is executed in grisaille. In these ardently painted visions, Brown transforms Rococo, Baroque, and Expressionist sources into compelling contemporary narratives. The Death of the Virgin (2012) depicts a swath of figures in the grip of an amorphous specter. The marble-textured forms are set against a black, ominous void, a reimagining of a François Boucher sketch of the Rape of Persephone; the painting also appropriates the black-and-white palette of Pieter Bruegel the Elder’s sixteenth-century Death of the Virgin. With each subject suspended in isolation, Brown offers a vividness that suggests the spiritual and invites contemplation.

Brown’s characteristic sculptures—deliquescing forms comprised of thickly layered oil paint in an agitated palette of acid and earthy tones—are taken to ambitious new levels in a twelve-foot-wide woman’s torso, his largest sculpture to date. In other new works, he takes existing antique bronze figures and playfully masks them in thick brushstrokes that evoke the obsessive paint layering of Frank Auerbach. Bronze limbs protrude, allowing glimpses of the sculptures which have been all but overtaken by glutinous layers of paint. Overwhelming the found object, Brown creates a pastiche of old and new, figurative and abstract, painting and sculpture.

The exhibition will be accompanied by a fully illustrated catalogue including an essay by Rudi Fuchs.