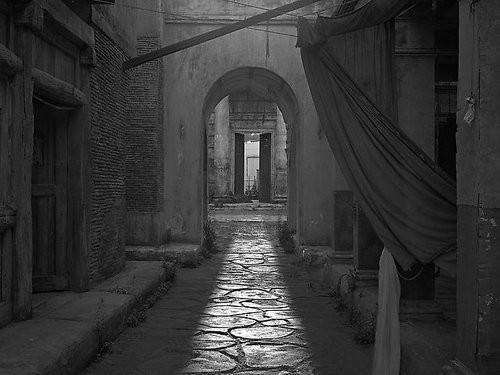 Opening reception for the artist: Thursday, September 23rd, from 6 to 8 pm


In these pictures I draw upon the inherent quietness and uncanny aspects of the empty sets. As with much of my work, I looked at the blurred lines between reality and fiction, nature and artifice, and beauty and decay.
--Gregory Crewdson

Sanctuary, a group of forty-one black-and-white photographs, is the first that Crewdson has produced outside the United States. Digitally photographed and produced with minimal reworking, it is also his first black and white series since Hover (1996-1997). Shot on location at the legendary Cinecittà studios in Rome, he has moved beyond the construction of the surreal human drama that drove previous series.

Sanctuary is virtually devoid of human presence. Instead, Crewdson has made the abandoned outdoor film sets the subject of, rather than the mere setting for, his pictures. Moving through the empty streets of "Ancient Rome" at the beginning and end of the day, he has captured the palpable atmospheres of melancholy lurking at every twist and turn, cloaked in shadow or suddenly illuminated by a shaft of daylight. Although the links to the great chroniclers of urban environments such as Eugene Atget and William Eggleston are evident, Crewdson has added a new layer to the genre by searching for his particular form of verité within the artificial leftovers of cinematic reality.

Crewdson's imaginary stems from the impulses that have shaped the surreal visions of American artists from Albert Bierstadt to Stephen Spielberg. In the past he sought particular locations where he could create psychologically charged tableaux vivants that conflated empirical observation with artifice, like film stills from films that never existed. These photographs were often the result of weeks of preparation, a method with parallels in film production. In previous series including Twilight (1998-2002) and Beneath the Roses (2003-2007), feelings of alienation and anxiety, and oddness pervade meticulously staged scenes, exposing the hidden dramas embedded in normative suburban existence.

In Sanctuary, Crewdson's focus on scenographic architecture as the principal subject underscores the illusory techniques that he has previously used to construct his scenes and actions. The series contains certain characteristics of a documentary film by which is exposed the hidden life of movies and their artifacts that remain once production has ceased. In several images the underlying structure of the façades and scaffolding of decaying sets is exposed; in others, period buildings are framed by cobbled streets and open ground now overtaken by grasses and weeds; ruined statues, the odd graffiti on a wall, puddles of rain water, and other detritus further emphasize the eerie absence of life that these images convey, heightened by the ambient light of dawn and dusk. The intimate scale of the black-and-white photographs serves to further intensify the poignancy of each deserted scene.

A fully illustrated catalogue of the complete series with an essay by The New York Times film critic A.O. Scott is being published by Abrams to coincide with the exhibition.

"Sanctuary" will be exhibited at Gagosian Gallery Rome, in January 2011.

Gregory Crewdson was born in 1962 in Brooklyn, New York and received a BA at SUNY, Purchase and an MFA at Yale University. His photographs are included in numerous museums and public collections around the world including the Whitney Museum of American Art, New York; the San Francisco Museum of Modern Art; the Fotomuseum Winterthur, Switzerland; and the National Gallery of Victoria, Melbourne. A retrospective of his work began at Kunstverein Hannover, Germany (2005) and traveled to institutions including Fotomuseum Winterthur, Switzerland; and the Hasselblad Center, Sweden. Another traveling exhibiton of his work is scheduled to open at the Kulturhuset Museum, Stockholm, in February 2011, followed by Sorte Diamant, Copenhagen and
c/o Berlin, Berlin, among others.

Crewdson is a faculty member of the Department of Photography at Yale University and lives in New York City.
www.gagosian.com