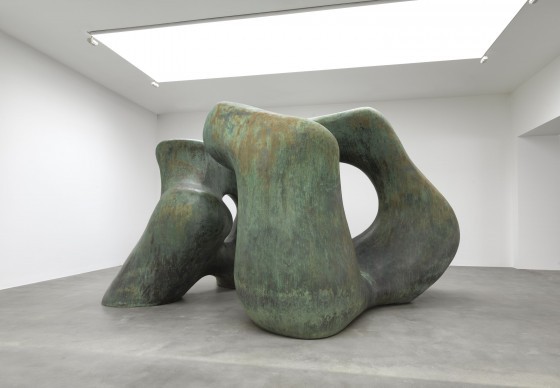 Everything I do, I intend to make on a large scale... Size itself has its own impact, and physically we can relate more strongly to a big sculpture than to a small one.
—Henry Moore

Gagosian Gallery, in collaboration with The Henry Moore Foundation, is pleased to present a major exhibition of large-scale sculptures by Henry Moore, which opened at Larry Gagosian’s Britannia Street location in London earlier this year.

A pioneer of modern British sculpture, Moore engaged the abstract, the surreal, the primitive and the classical in vigorous corporeal forms that are as accessible and familiar as they are avant-garde. His monumental sculptures celebrated the power of organic forms at a time when traditional representation was largely eschewed by the vanguard art establishment. The overwhelming physicality of their scale and forceful presence promotes a charged relation between sculpture, site and viewer. Reclining Figure: Hand (1979) is immediately identifiable as a human form despite its modulated stylization. The rounded, cloud-like body, which contrasts with a “knife-edge” head derived from bird bone, attests to Moore’s more exploratory impulses when compared to Reclining Connected Forms (1969), where he alludes to body parts using the vocabulary of mechanical components. Large Two Forms (1966) takes its shape from flints, whereas Large Spindle Piece (1974) reveals an interest in both natural and man-made objects.

It was Moore’s intention that these large-scale works be interacted with, viewed close-up, and even touched. Given their heft and mass, they are most commonly sited outdoors, subject to the effects of changing light, weather, and landscape. But seen within the pristine white environment of the gallery, the contrasting shapes, patinas and sheer scale of the sculptures are more keenly felt. Brimming with latent energy, their richly textured surfaces and sensual, rippling arcs and concavities can be seen to new effect.

This exhibition also includes a number of maquettes and found objects from Moore’s studio in rural Hertfordshire, which he called his “library of natural forms.” Crafted from plaster and Plasticine, these small-scale models were a vital step in realizing great sculptural schema. Fragments of bone, flint, and shell provided Moore with aesthetic inspiration: the curve and texture of animal bone was cast as the neck and head of Maquette for Seated Woman: Thin Neck (1960), and a piece of flint from the local sheep fields was used to create the open and pointed forms of Maquette for Spindle Piece (1968).

A fully illustrated catalogue accompanies the exhibition, with essays by Anita Feldman, the exhibition’s curator and Head of Collections and Exhibitions at The Henry Moore Foundation; and art historian Anne Wagner, former Moore Research Curator at Tate.

Henry Moore was born in Yorkshire, England in 1898 and died in Hertfordshire, England in 1986. His first solo exhibition was held in London in 1928; by the late 1940s he had become one of Britain’s most celebrated artists with a diverse artistic output that encompassed drawings, graphics, textiles, and sculpture. In the following decades he continued to receive increasingly significant sculpture commissions, following a major retrospective at the Museum of Modern Art in New York in 1946 and after winning the International Sculpture Prize at the Venice Biennale in 1948. His heightened success and fame provided him with the means to work increasingly in bronze rather than direct carving, thus achieving the monumental scale and freedom of form invention that he had always desired for his work. His public commissions occupy university campuses, pastoral expanses, and major urban centers in 38 countries around the world. His sculpture and drawings have been the subject of many museum exhibitions and retrospectives, including the Tate Gallery, London (1951, 1968); Whitechapel Gallery, London (1957); Tate Gallery, London (1968); Forte di Belvedere, Florence (1972); Tate Gallery and the Serpentine Gallery, London for the occasion of Moore’s eightieth birthday (1978); Metropolitan Museum of Art, New York (1983); Yorkshire Sculpture Park, Wakefield (1987); Royal Academy of Arts (1988); Shanghai Art Museum (2001); National Gallery of Art, Washington D.C. (2001); Caixa Forum, Barcelona, (2006); Kunsthal, Rotterdam (2006), Didrichsen Museum, Helsinki (2008); Royal Botanical Gardens, Kew (2007); Tate Britain (2010); and the Kremlin Museums, Moscow (2012).

The Henry Moore Foundation was founded by Moore in 1977 to increase public enjoyment of the arts, especially sculpture. Today it opens his restored Hertfordshire home, studios, and sculpture grounds to the public, tours the world's largest collection of his work, and maintains a center for the study of sculpture at the Henry Moore Institute in Leeds. The Foundation also supports sculpture through an active grants program. In 2012, ‘Henry Moore Friends’ was launched to help promote his legacy.
www.gagosian.com