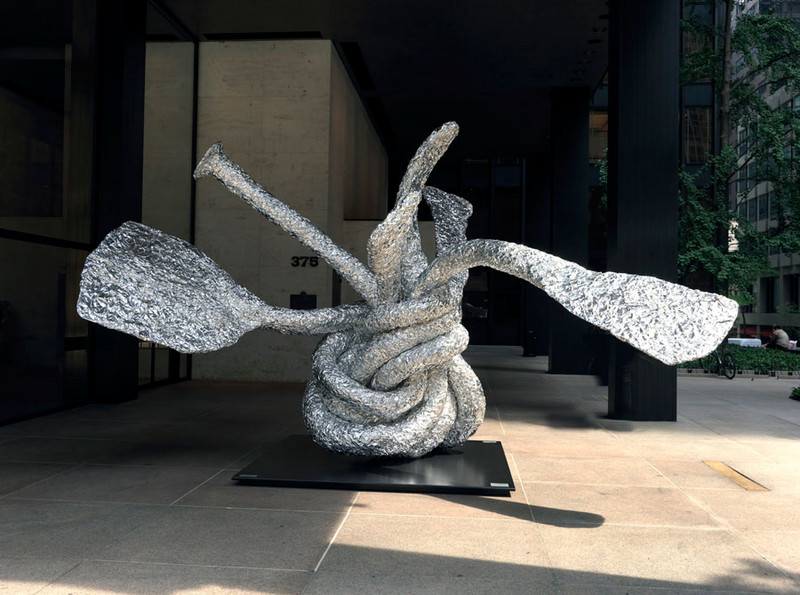 Gagosian Gallery is pleased to announce four monumental sculptures by the late John Chamberlain, on view at the Park Avenue plaza outside the historic Seagram Building from August 10.

PINEAPPLESURPRISE (2010), MERMAIDSMISCHIEF (2009), ROBUSTFAGOTTO (2008), and FROSTYDICKFANTASY (2008) are among the later sculptures that Chamberlain produced during his sixty-year career. Up to fifteen feet in height, the works on view are constructed from silver, green, or copper-colored industrial aluminum, which has been looped and flexed into whimsical, biomorphic forms. From the mid–1970s, Chamberlain began fashioning miniature sculptures from household aluminum foil. In 2007, he began successfully transposing these miniatures into durable materials on a grand scale, but without sacrificing any of the lightness, directness, and spontaneity of the initial foils. Although he used materials other than his signature “art supply” of discarded metal car parts, these sculptures consistently reflect his lifelong concern with what he described as “fit.” The intricately tangled and woven parts ultimately resolve themselves in balanced, cohesive structures.

The titles of these sculptures are also amalgamations, consistent with Chamberlain’s longtime interest in language play. Capitalization, puns, nonsensical words, and sexual innuendoes proliferate throughout his naming structure that makes use of an off-beat humor and abounds with personal references. As noted in the catalogue for the recent Guggenheim Museum retrospective, ROBUSTFAGOTTO could be a play on the Italian word “fagotto,” which was a Renaissance-era instrument predating the bassoon, while “robust” is commonly used to describe woodwind performances. Together, they might suggest Chamberlain’s reverence for music, especially jazz. Read another way, the word “bust” becomes evident, as does the imperative, “got to,” and the palindromic name “Otto.”

Given their reflective and textured surfaces and powerful torque, the sculptures appear to be in constant flux as one walks around them on the plaza; changes in atmosphere and weather also impact their overall appearance. The streamlined geometric Modernism of Ludwig Mies van der Rohe’s Seagram Building (1954–58) further accentuates their playful, irreverent, and exuberant presence in the bustling urban landscape.

John Chamberlain (1927–2011) was born in Rochester, Indiana. He attended the Art Institute of Chicago (1951–52) and Black Mountain College (1955–56) and moved to New York in 1956. His work is represented in many major public collections including Chinati Foundation, Marfa, Texas; Menil Collection, Houston; Solomon R. Guggenheim Museum, New York; Whitney Museum of American Art, New York; Museum Ludwig, Cologne; and Tate Modern, London. He has had two retrospectives, both at the Solomon R. Guggenheim Museum, New York, in 1971 and in 2011. Chamberlain has been the subject of more than one hundred one-person exhibitions, including those at the Dia Art Foundation (1983); Museum of Contemporary Art, Los Angeles (1986); StaatlichE Kunsthalle Baden-Baden (1991); Stedelijk Museum, Amsterdam (1996); Chinati Foundation, Marfa, Texas (2005-2006); and the Menil Collection, Houston (2009). His work has been included in numerous international survey exhibitions, including Bienal de São Paulo (1961, 1994), Biennale di Venezia (1964), Whitney Biennial (1973, 1987), and Documenta 7 (1982). This is the second temporary installation of the artist’s work on the Seagram Building plaza; the monumental American Tableau was created for display on the plaza in 1984.
www.gagosian.com