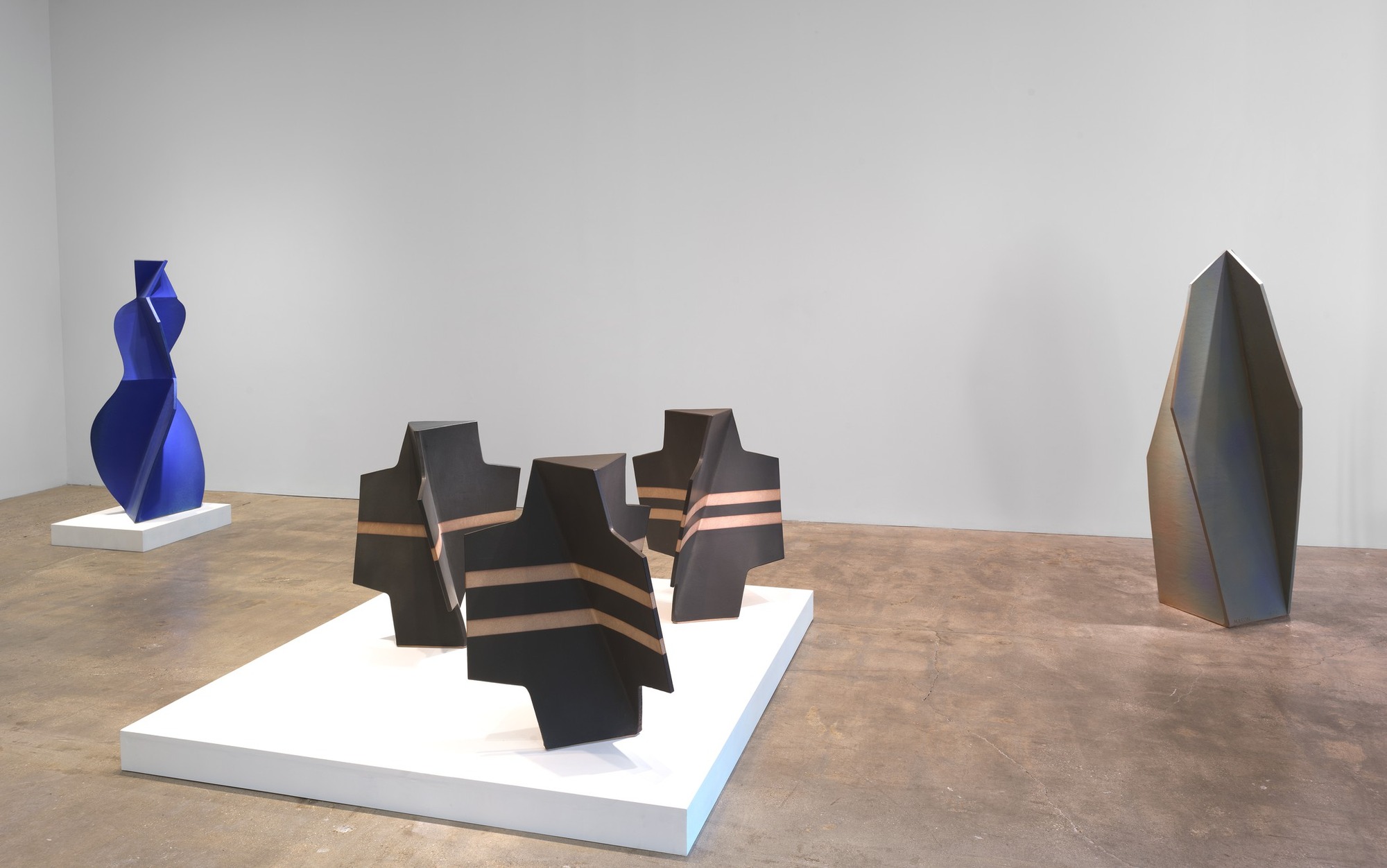 Rotation is a form of symmetry. The most common forms of symmetry are reflection, which most people think of as bilateral; rotation; inversion; and translation, which is just moving an object in a line. . . . But the thing about symmetry is it’s invisible. It does not proclaim itself. It’s there, you know, and it has a structural reality.
—John Mason

Gagosian is pleased to present Geometric Force, an exhibition of ceramic works by the late John Mason.

One of the most visionary ceramic artists of the last century, Mason brought his medium into conversation with Abstract Expressionism by extending the physical and spatial properties of clay. He began his career on the West Coast in the 1950s, as part of a group of artists who studied with the pioneering ceramist Peter Voulkos at the Otis Art Institute, Los Angeles. Mason and his contemporaries challenged conventional ideas about ceramics, making large, abstract, subversive works. Mason worked at scale, his wall reliefs and expressionistic sculptural works matching the ambitious painting and sculpture of the era. In his Los Angeles studio, which he shared for a time with Voulkos, they began employing industrial techniques and technologies: humidifiers from fruit packing plants, which allowed clay to stay pliable for longer periods of time; heavy-duty dough mixers; and a custom-built kiln that enabled him to fire works six feet in height, often using up to two tons of clay at a time.

Mason showed frequently at the renowned Ferus Gallery in Los Angeles during the 1950s and ’60s—including in the gallery’s inaugural exhibition, and four solo exhibitions—and exhibited consistently in the United States over the following decades. He saw a resurgence of interest in his work later in his life, and participated in exhibitions such as Pacific Standard Time: Crosscurrents in L.A. Painting and Sculpture, 1950–1970 at the Getty Center in 2011–12 and the Whitney Biennial in 2014. In recent years, contemporary artists as diverse as Shio Kusaka, Sterling Ruby, Ed Ruscha, and Jonas Wood have cited him as an important influence.

The works in this exhibition, which span Mason’s early career to the years preceding his death at age ninety-one in 2019, attest to the range and vocabulary of his innovation and experimentation in clay. Standing almost six feet tall, Orange Cross (1963) is glazed in a rich hue that recalls the desert landscape of Nevada, where Mason grew up. These earthy tones, along with shades of blue reminiscent of an open sky, recur throughout his work. Orange Cross encapsulates many of Mason’s evolving concerns, including tensions between geometry and materiality, and open and closed forms. Smaller works demonstrate his ability to shift his scope in terms of form and scale. His “orbs” are made from geometric circles and right angles, fitting together in modular formation with no single beginning, end, top, or bottom.

Often cited as a contributor to the “revolution in clay,” Mason changed the perception of the medium from craft into fine art, mixing Western and Eastern influences. The material result is something completely sui generis and hard to trace—untethered to a single genre or movement, yet related to many.