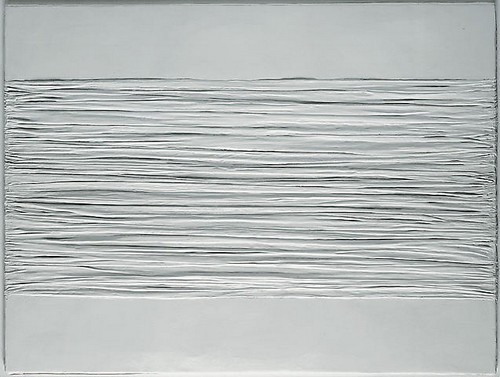 Gagosian Gallery is proud to announce the first comprehensive U.S. retrospective of the work of Piero Manzoni (1933-1963), the enfant terrible of Italian art in the 1950s and early 1960s. Curated by Germano Celant, a leading Manzoni scholar who is the author of both editions of the catalogue raisonné (1975 and 2004), the exhibition is organized in close collaboration with the Archivio Opera Piero Manzoni and features important loans from the Archivio and several museums and private collections, including the Herning Kunstmuseum in Denmark, which is lending a nucleus of key works never before exhibited in the United States.
Spanning the entire range of Manzoni's oeuvre, this unprecedented exhibition will also include works by the artist's American and European contemporaries, tracing his brief but intense and highly provocative artistic journey within a broader international context. Manzoni's decisive contribution to the art of the late fifties and early sixties will be illuminated by his alignments with, and responses to, contemporary figures such as Yves Klein, Lucio Fontana, Alberto Burri, Jean Fautrier, Robert Rauschenberg, Frank Stella, Enrico Castellani, Heinz Mack, Tony Smith, and Yayoi Kusama.
Manzoni's earliest works were anthropomorphic silhouettes and canvases bearing the imprints of ordinary everyday objects, rendered in oil and grease. In 1957, he initiated the Achromes: white canvases that he covered with rough gesso and imbued with glue and kaolin (the white clay used in making porcelain), then draped on supports so that the fabric would sag and crease as it dried. Having conceived the Achromes as works free of any outside reference, he went on to experiment with the construction of "neutral" expanses incorporating sewn fabric squares and other materials.
As his approach to artmaking became increasingly radical, Manzoni produced series such as the Linea, drawings of a single line on a length of paper, rolled up and sealed in a cardboard tube, which he then labeled and signed. Subsequent experiments included the pneumatic sculptures Bodies of Air (Corpi d'aria) and Artist's Breath (Fiato d'artista), which tugged at definitions of artistic sovereignty and virtuosity; Magic Bases, which transformed the people who stood on them into works of art; and a new series of Achromes made of several materials (such as cotton wool, fiberglass, or bread rolls) in white or single phosphorescent colors.
In 1961, Manzoni signed his first human subjects to create Living Sculptures; produced limited edition thumbprints and the Declarations of Authenticity; and made his most outrageous gesture by producing ninety small cans, each sealed with a label bearing the words Artist's Shit (Merda d'artista) and priced by weight based on the current value of gold. In the same year, at the invitation of the industrialist Aage Damgaard, he created Socle du Monde (Base of the World), a large iron plinth that he dedicated to Galileo and placed upside-down in a field in Herning, Denmark, thus rendering the entire globe as a work of sculpture. Socle du Monde will travel from its permanent site to New York as a key element of the Manzoni retrospective.
The exhibition will be accompanied by a fully illustrated catalogue published by Skira, in collaboration with Gagosian Gallery, which will include a new essay by Germano Celant.
Piero Manzoni was born in Soncino, Italy, in 1933 and died in Milan in 1963. His work has been the subject of numerous international exhibitions, including retrospectives at the Musée d'Art Moderne de la Ville de Paris (1991), Castello di Rivoli-Museo d'Arte Contemporanea (1992), the Serpentine Gallery, London (1998), and most recently at the Museo d'Arte Contemporanea Donnaregina, Naples (2007), curated by Germano Celant. His work is represented in many public collections, including The Museum of Modern Art, New York; Stedelijk Museum, Amsterdam; Tate Modern, London; and the Galleria Civica d'Arte Moderna e Contemporanea, Turin.
www.gagosian.com