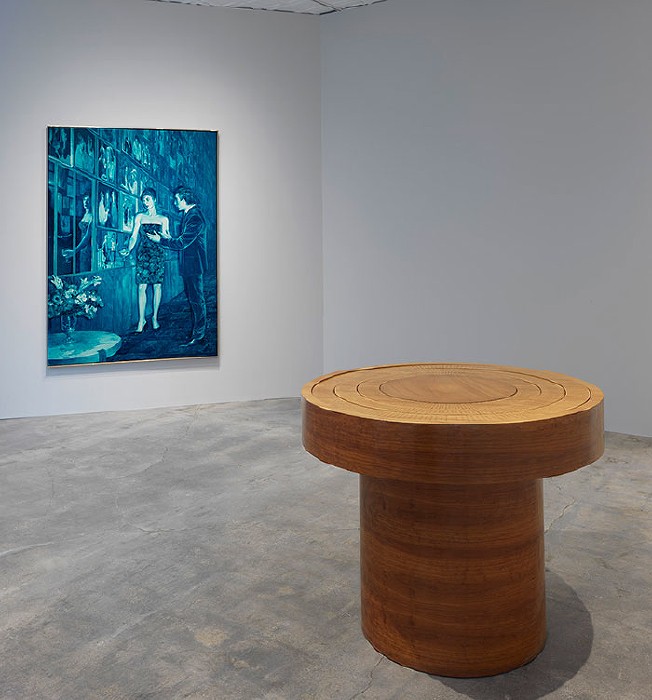 Picture a deck of cards based on eye-mind-hand contradictions. To play the game, select some cards, shuffle them, and continue by finding new analogies. You make up the cards as you go. You perform the contradictions in order to realize or understand them. Sometimes new features or behaviors emerge. Sometimes it might seem as though the deck is infinite.
—Mark Tansey

Gagosian is pleased to present “Reverb,” an exhibition of two works by Mark Tansey: a new oil painting Reverb (2017) and Wheel (1990), a wooden sculpture.

Each of Tansey's paintings is a visual and metaphorical adventure in the nature and implications of perception, meaning, and interpretation in art. Working with the conventions and structures of figurative painting, he creates visual corollaries for sometimes arcane literary, philosophical, historical, and mathematical concepts. His exhaustive knowledge of art history accumulates in paintings through a time-intensive process. Images are mined from a vast trove of primary and secondary sources assembled over decades—magazine, journal and newspaper clippings, as well as his own photographs—which he submits to an intensive process of manipulation. The strictly duotone paintings have a precise photographic quality reminiscent of scientific illustration, achieved by applying gesso then washing, brushing and scraping paint into it.

Through absurdist composition and intricate detail, in Reverb Tansey draws unlikely associations between different modes of representation. At the center of a composition, a man and a woman in evening dress stand before a wall of framed pictures, engaged in conversation. The woman, reflected in a mirror, gazes out at the viewer while the man gestures towards her. In the images on the walls, drawn from magazines and newspapers, cultural icons—Woody Allen, Diana Vreeland, Marilyn Monroe, Groucho Marx, and many others—are seen, making similarly conversational and theatrical gestures. The frames recede, morphing into the swooping lines of diagrams drawn by physicist Richard Feynman. The diagrams, which describe the mathematical relationships of subatomic particles, speak to the connections that Tansey has set up between his principal figures. Meanwhile, Tansey’s own diagrams—critical notations for as yet unrealized paintings—are tiled beneath the couple's feet. Reverb contains more than one hundred and fifty collected images on the themes of reflection, symmetry, and perception that pervade Tansey's oeuvre.

Nearly thirty years earlier, Tansey made the table-like sculpture, Wheel, as a way of devising new complexes for his paintings. Three concentric wooden circles rotate independently of one another. On top of each circle, he engraved a myriad of phrases such as “ideological butterflies” or “the archive.” As the circles rotate, phrases align in different combinations, producing statements to be translated into imagery. The wheel form continues to be essential to Tansey's painting. In Reverb, for example, an image of a circular table features a flipped map of the United States on which Rhode Island, his place of residence, is marked with his signature.