From Modigliani To Currin 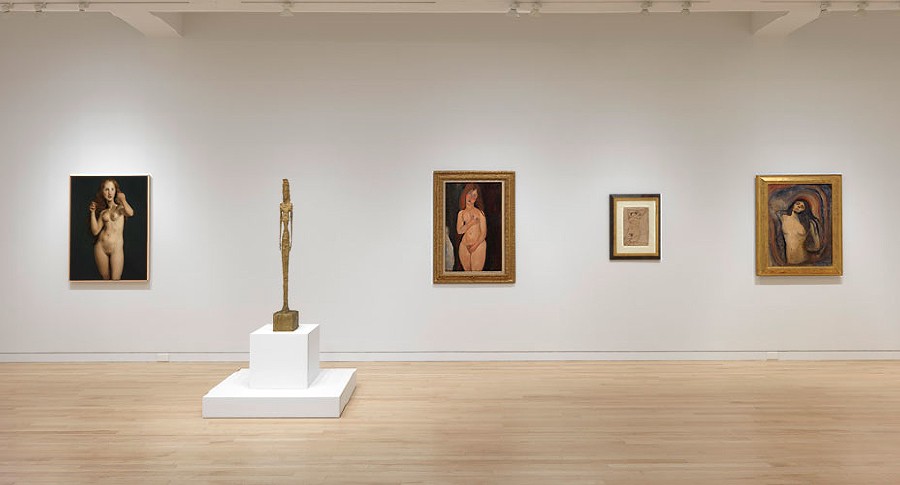 The nude is not the subject of art, but a form of art.
—Kenneth Clark

“Nude: From Modigliani to Currin” presents depictions of the human body from the eve of modernism to the present day. From Paul Cézanne’s Baigneurs (c. 1890–95) and Baigneurs Debout (1876), and Edvard Munch’s harrowing Madonna (1895–97) to Charles Ray’s Young Man (2012), this exhibition considers the nude as an infinitely suggestive material and form.

With the rise of modernism—exemplified here by works including Pablo Picasso’s Nue endormie (1932) and Amedeo Modigliani’s Nue couché aux bras levés (1916)—representations of the human body moved away from the idealized and romantic towards fragmented, erotic distortions that reflected shifting ideas about human psychology and perception. Marcel Duchamp’s iconoclastic Nude Descending a Staircase (1912), represented here by a color pochoir from 1937, offers a refracted view of a body in dynamic motion, relating to the Cubist isolation of body parts into signs and symbols to be assembled and disassembled at will. In Alberto Giacometti’s Figure moyenne II (1947), the existential anxiety of the postwar era coalesces in an emaciated figure in cast bronze, the very embodiment of human fragility.

In René Magritte’s Surrealist tableaux such as L’embellie (The Break in the Clouds) (1942) and Clairvoyance (1965), the body is a motif like any other, detached from its traditional associations and transposed into a world of cryptic subconscious; while in Yves Klein’s performative Anthropometries, such as Monique (ANT 59) (1960), the naked female body is covered in paint and pressed directly against canvas to produce a direct impression, rather than being a mediated, scopic view. The dynamism of Francis Bacon's Two Figures on a Couch (1967) lies in its abandonment of the classical human form, as well as its sustained investigation of movement captured, with limbs blending into torqued masses of flesh.

In the second half of the twentieth century, Pop art dramatically reconfigured aesthetic approaches to the nude. As exemplified in the work of Andy Warhol, Tom Wesselmann, and Roy Lichtenstein, artists began to glean imagery from glossy magazines and the graphic arts. Warhol’s Walking Torso (1977) forgoes centuries of traditional practice for commercial silkscreen processes in order to repeat images mechanically, introducing incremental shifts that evoke cinematic sequencing. In David Hockney’s The Room Tarzana (1967), dramatic tension is built where graphic blues and greens make up a flat, static image of a bare-bottomed boy lying face-down on a bed in a brightly lit room.

With Lucian Freud’s Night Portrait (1977–78) and Jenny Saville’s Trace (1993–94), the dense tactility of oil paint effects the sensation of flesh, together with its enigmas, troubles, and desires. Willem de Kooning’s Untitled (c. 1966) is a typically expressionist homage to the abundance and sensuality of the female body. These corporeal qualities link contemporary painters to the innovations of their Renaissance forebears. While Jeff Koons’s porcelain sculpture Naked (1988) depicts a cloyingly precious moment between a young boy and girl—a gift-shop Adam and Eve—John Currin’s Nude with Raised Arms (1998) contains echoes of contorted Mannerist bodies, inflected with a newly sardonic eroticism.

The persistent impulse to depict the human body is present at every juncture in art history. In Gagosian’s ongoing series of diverse and engaging group shows, such as “Go Figure” (2009), “Crash” (2010), “The Show is Over” (2013), and “In the Studio” (2015), “Nude: From Modigliani to Currin” is a lively and varied exploration, from the late nineteenth century into the present, of the limitless ways in which the human body is both the subject and means of artistic endeavor.