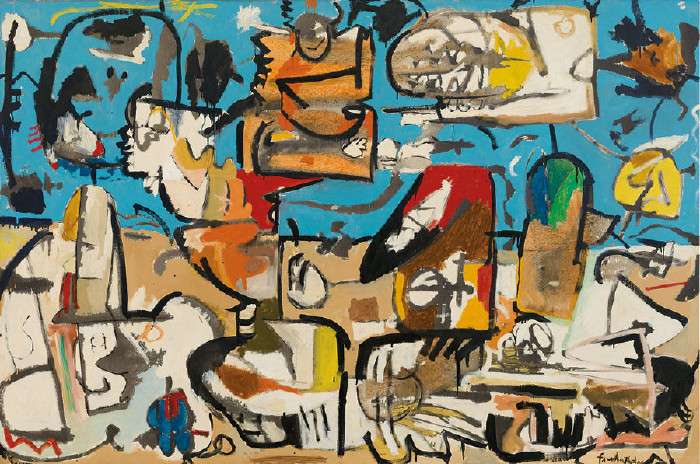 The only rule is that there are no rules. Anything is possible. ... It’s all about risks, deliberate risks.
—Helen Frankenthaler

Gagosian Gallery, in cooperation with the Estate of Helen Frankenthaler, is pleased to present a major exhibition devoted to Helen Frankenthaler’s paintings from the 1950s. While Frankenthaler is recognized to be one of the great American artists of the twentieth century, this exhibition is the first in thirty years—and the first in New York City in more than fifty years—to offer a broad survey of this pivotal body of work. It brings together almost thirty paintings, including important yet rarely seen works from Frankenthaler’s estate, and signature works from public and private collections.

“Painted on 21st Street: Helen Frankenthaler from 1950 to 1959” is curated by John Elderfield, Chief Curator Emeritus of Painting and Sculpture at The Museum of Modern Art, New York, and a consultant at Gagosian Gallery, who authored the principal monograph on Frankenthaler’s work in 1989.

Works in the exhibition range from the canvas from which the exhibition takes its title, Painted on 21st Street (1950–51) to the celebrated Mountains and Sea, of 1952; to key paintings of the later 1950s, among them The Museum of Modern Art’s Jacob’s Ladder (1957), and the UC Berkeley Art Museum’s expansive Before the Caves (1958). Together they offer a fresh look at the greater range and diversity of a body of work too often viewed only within the context of Color Field painting. It reveals how, in the 1950s, Frankenthaler was a major second-generation Abstract Expressionist artist who advanced the methods of mid-century painterly abstraction. She did so through the technical innovation of stain painting and by expansion of its affective range of subject matter, drawing inspiration from a broad spectrum of sources, from landscape to the figure; from paleolithic cave paintings to the work of the Old Masters; and from mythical scenes to childhood memories.

The paintings in Frankenthaler’s first solo exhibition, in 1951, at age twenty-two, synthesized the most radical aspects of the work of Jackson Pollock, Willem de Kooning, and Arshile Gorky, with their textured surfaces, washed with pale color and articulated by calligraphic drawing. The following year she painted Mountains and Sea, a breakthrough composition created by pouring thinned paint onto unsized canvas so that the paint soaked into the canvas, staining rather than coating, to become at once the drawing and the coloring. The abstract Color Field painter Morris Louis would famously remark that Frankenthaler’s Mountains and Sea was “the bridge between Pollock, and what was possible,” but the staining in her own work is often accompanied by paint drawn, scrawled, and splattered, and redolent with associations. In 1954–55, she combined staining with areas of heavy impasto, prior to the greatest run of paintings she made in that decade, in 1956–59. Among these are the pastoral landscape-themed Eden (1956), and Dawn after the Storm (1957, Museum of Fine Arts, Boston); re-imaginings of Old Master paintings, such as Europa (1957); and nursery-rhyme subjects, such as Mother Goose Melody (1959, Virginia Museum of Fine Arts). The final paintings in the exhibition, among them the large Red Square (1959, Bennington College), reveal brighter colors and a more condensed, abstract vocabulary of forms.

The exhibition is accompanied by a fully documented and illustrated catalogue with an introduction by John Elderfield; a new, full chronology by Lauren Mahony, which draws upon previously inaccessible archival sources; and important historical texts by the poet and art critic Frank O'Hara (1960) and former Rose Art Museum director Carl Belz (1981).