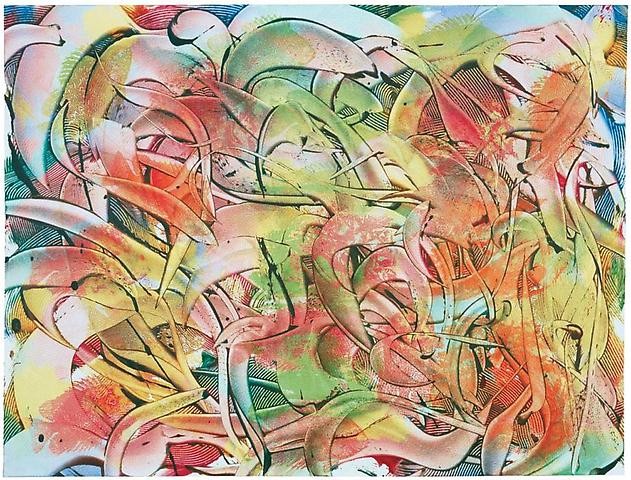 Essentially, everything in my work is about a process of description. My attitude towards repetition has to do with the cumulative effect of continuous applications of line and color. If we focus on that, and see them as crystallized into patterns or marks, what do they add up to? They become some kind of actively structured geographical field.
--Philip Taaffe

Gagosian Gallery is pleased to announce an exhibition of works on paper by Philip Taaffe, the first dedicated exclusively to his graphic work.

Taaffe's elaborate images are the slow product of wide-ranging meditations on the interrelation of generic forms and images in art, nature, architecture, and archaeology, filtered through a critical and dynamic relation to the history of abstract painting, both Occidental and Oriental. Drawing has always played an important role in his art. Early appropriationist canvases (after Bridget Riley, Myron Stout, Charles Shaw, and others) were largely hand-drawn. Later, paintings were often assembled from preliminary graphic studies, which were transferred to paper via relief printing, and collaged onto the canvas. Monotypes and other print-transfer processes, including rubbing, have also served as the basis for many of his large-scale paintings. Since 2003, Taaffe has experimented extensively with the technique of marbling, both on paper and canvas. The free-flowing visual energy that he so skillfully manifests in these "floating pigment" works – which refer to Oriental and Islamic calligraphy, as well as to early natural-history illustration -- has unlocked an aspect of his aesthetic that seems antithetical to his often highly controlled and formal working methods.

Taaffe's new body of work is an exciting continuation of these explorations. Adapting and adding the paste-paper technique to his wide-ranging visual lexicon, he has produced startling results. Paste papers date back to the eighteenth century and earlier, when they were used in decorative book-bindings. By mixing pigments with flour paste and other natural ingredients, an array of designs were created using combs, brushes, and other embossing tools. Décalcomanie was the French term originally used to describe this process, deriving from the use of decals to transfer imagery and patterns to porcelain. In the twentieth century the technique was re-discovered by the Surrealists and used to remarkable effect, evoking abstract imagery through chance operations and the automatic gesture.

In the sumptuous catalog that accompanies this exhibition, poet and Islamic scholar Peter Lamborn Wilson examines the historical practices of paper-marbling and paste-paper production in the context of the lost traditions of European Hermeticism, constructing a parallel lineage in Western art history that encompasses figures such as Paracelsus, Giuseppe Arcimboldo, Bernard Palissy, and William Blake, as well as their modern counterparts Odilon Redon, Henri Michaux, Bruce Conner, and Harry Smith. In what Wilson terms "the alchemy of consciousness," and as Taaffe's works attest, in the once-secret techniques of marbling and paste papers lie the very seeds of the abstract image in the twentieth century.

Philip Taaffe was born in Elizabeth, New Jersey in 1955 and studied at Cooper Union, New York. He has participated widely in international exhibitions, including the Carnegie International, the Biennale of Sydney and the Whitney Biennial of American Art, with individual survey exhibitions at IVAM, Valencia (2000), Galleria d'Arte Moderna, San Marino (2004), and Kunstmuseum Wolfsburg (2008). His work is included in numerous public collections, including the Museum of Modern Art, New York; the Philadelphia Museum of Art; The Whitney Museum of American Art, New York; the Solomon R. Guggenheim Museum, New York; the San Francisco Museum of Art, and Museo Nacional Reina Sofia, Madrid. Taaffe lives and works in New York City.
www.gagosian.com