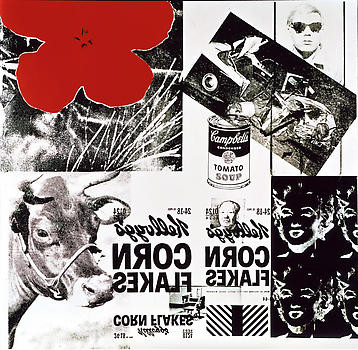 “For it is not possible to step twice into the same river, according to Heraclitus, nor to touch mortal substance twice in any condition: by the swiftness and speed of its change, it scatters and collects itself again—or rather, it is not again and later but simultaneously that comes together and departs, approaches and retires.”
--Plutarch

Gagosian Gallery is pleased to announce Retrospective, including works by Chris Burden, Marcel Duchamp, Tom Friedman, Piero Golia, Douglas Gordon, Richard Hamilton, Jasper Johns, Roy Lichtenstein, Takashi Murakami, Piotr Uklański, and Andy Warhol. The retrospective exhibition, conceived and realized by a museum institution, is perceived as a watershed in any artist’s career. This exhibition looks at various ways in which contemporary artists mine their own histories to create their own defining moments -- the retrospective gesture as a means of creating a perpetual present, as a process of physical recollection, as a strategy of circulation, or as a pure conceit.
The exhibition begins with a famous twentieth century example, Duchamp's Boîte-en-valise. Between 1935 and 1941, Duchamp created an edition of twenty boxes, each in a brown leather carrying case containing a myriad of miniature works of art, each with slight variations in design and content. Duchamp was already thinking about producing a box containing his works – or rather texts and a few sketches – in the 1910s. These early musings led to the edition La Boîte verte (The Green Box) in 1934. Following this, he started planning another box containing all the works he had created since the beginning of his career, from Nude Descending a Staircase, Chocolate Grinder, and the Nine Malic Moulds, to three-dimensional replicas of sculptures and readymades, including the notorious Fountain. The painting reproductions were black-and-white photographs that he hand-colored, thereby created “new originals” which he then certified.
Following his invention of the readymade, Boite-en-valise further underscores the
interdependence of object and context so central to Duchamp’s circular definition of the work of art.
More than sixty years later, Takashi Murakami turned Duchamp’s precedent inside out when he released a series of popular shokugan or snack-toy figurines, packaged and labeled “Superflat Museum” and sold in Japanese convenience stores. The figures range in height from 1" to 4" and include reproductions of some of his sculptural work, such as the now-famous Hiropon, as well as figures rendered in three dimensions from his paintings and drawings. Handcrafted by renowned toy manufacturer Kaiyodo, each comes with a certificate of authenticity and a mini-portfolio including information about the work that inspired them and interviews with Murakami, as well as two pieces of chewing gum.
In their mature careers, Andy Warhol and Jasper Johns looked back on their own oeuvres, sampling from their own imagery and embedding these samples in newly conceived, startling configurations. In Warhol’s stylish Retrospective Paintings, images from very different phases of his work collide to uncanny effect. On a single canvas, a cow jostles with a vivid flower, a Corn Flakes logo, a spectral Marilyn, and a car crash. Johns’ cycle of paintings, The Seasons (1985-1986) is an allegory of the artist's life and interests, listed, studied, and set down in an idiom that is both rich and dense – from Picasso’s The Minotaur Moving His House (1955) to Johns’ own paintings and quotations from art and life. Finally, his own presence finds it way into the mix, rendered as an outline drawn directly from his shadow. The drawings, watercolors and prints related to The Seasons show Johns exploring the alternatives and the second or third thoughts that came to him during the eighteen months that the cycle was in production, with the same steady compulsion to combine and recombine, work and rework.
A younger generation of artists follows a less poetic and more pragmatic strategy, not without a sense of humor or self-deprecation. Piotr Uklański has reproduced a to-scale linear wall installation of what he considers to be his most important works to date; Douglas Gordon has assembled “pretty much every film and video work from 1992 until about now,” playing simultaneously on a veritable arsenal of stacked video monitors; Tom Friedman’s Inside-out (1991-2006) is itself a culture made from the sweepings and leftovers of the studio, a literal recollection of fifteen years of material and process.
Using the convention of exhibition planning using models, Piero Golia’s Retrospective is a scale model not only of an exhibition and exhibition space, but of the artist’s own wishful thinking. Chris Burden's retrospective gesture, the ironically named Deluxe Photo Book 1971-73, is housed in a modest, hand-painted binder containing documentary photographs and explanatory texts pertaining to his notorious performances.
www.gagosian.com