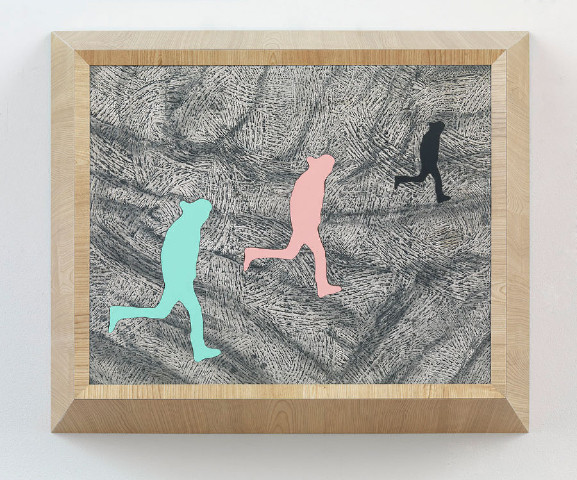 The art that I make takes place about one step away from the normal stir of human activity.
—Richard Artschwager

Gagosian New York will pay tribute to the late Richard Artschwager with an exhibition of his last works. “Richard Artschwager: No More Running Man” coincides with the major touring retrospective organized by the Whitney Museum of American Art in collaboration with Yale University Art Gallery, currently on view at Haus der Kunst in Munich until January 26.

Tickling many genres but cleaving to none, the art that Artschwager produced over the span of fifty years has been variously described as Pop art, because of its derivation from utilitarian objects and incorporation of commercial and industrial materials; as Minimal art, because of its geometric forms and solid presence; and as Conceptual art, due to its cool and cerebral detachment. His approach, which combined influences as diverse as counterintelligence and cabinetmaking, focused on structures of perception, conflating the visual world of images (painting) and the tactile world of objects (sculpture).

Synthetic materials were critical to Artschwager’s project, whether the readymade frisson of Formica with its color fields, patterns, and hard sheen; or the suggestiveness of Celotex, the heavily textured, dimensional paper board on which he painted grisaille renderings of photographs both topical and obscure, landscapes, and parlor scenes. He turned everyday domestic motifs—tables, chairs, doors and mirrors—into sculptural riffs. Greatly enlarged figures of punctuation (exclamation points, question marks, brackets) became autonomous forms in both hard and soft materials, while "blps” inspired by morse code appeared surreptitiously in galleries and parks and on city streets and skylines. Stiff rubberized horsehair was molded into flat silhouettes or discrete containers. Artschwager forged a maverick path by confounding the generic limits of art, making the visual comprehension of space and the everyday objects that occupy it strangely unfamiliar.

On view are Artschwager’s final variations on the running man, a leitmotif that assumes new poignancy in this posthumous exhibition. The image derives from a photograph of a distant figure in profile, running through a snowy park during the cold winter of 1989. Clipped by Artschwager from The Boston Globe during its coverage of the coldspell, the image was reimagined in several of his works beginning in 1991, and provided the foundation for this final cohesive series. Each wall-mounted work depicts one, two, or three monochrome silhouettes repeated, or mirrored like Rorschach images, on a grisaille of textured plastic or handmade paper. With their deep, handcrafted frames that mimic woodgrain or granite, each picture doubles as a sculpture. Anticipating this series are the laminated wood sculpture Monument (2010) and Standing Self Portrait (2009), a mysterious phantasmic nude that emerges amidst the textures of the patterned plastic background and trompe l'oeil frame. Erasing distinctions between synthetic and organic surfaces; painting versus sculpture; and everyday objects versus art objects, these boundless anti-paintings are distillations of Artschwager’s lifelong disruption of the status quo.

The exhibition is accompanied by a fully illustrated catalogue with an essay by Robert C. Morgan and an introduction by Bob Monk.