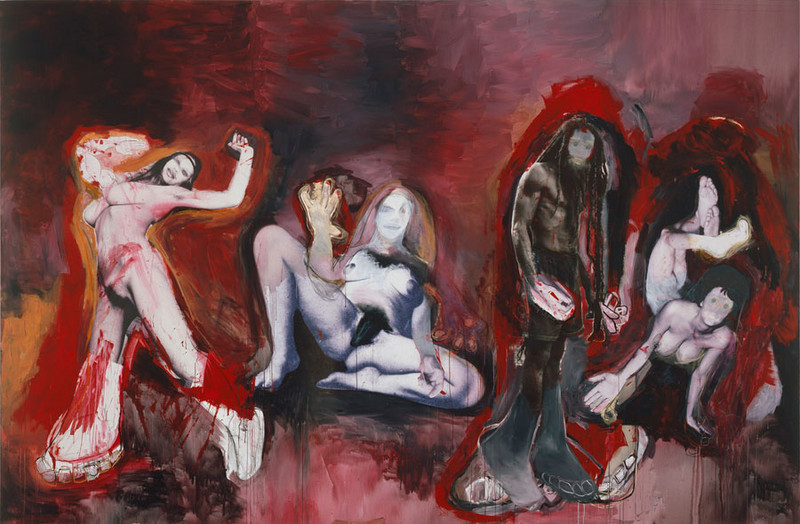 I was born in the Canal Zone in 1949. Same year that George Orwell’s 1984 was published. Why the Canal Zone? My parents worked for the government, specifically for the OSS. I don’t remember much about Panama. The family moved to Braintree, Mass., twenty minutes south of Boston in 1954. The town had just built twenty-seven houses. All the same. It was called a “development.” The house was put up in like five days. It wasn’t made very well but it was brand new. Everything was “brand new.” The place we were in was called the suburbs.

“I Like Ike.”
I didn’t like Ike. And I didn’t like Mamie, his wife either. I liked TV, magazines, and movies. I liked game shows. ‘Truth Or Consequences.’ ‘Who Do You Trust.’ ‘What’s My Line.’ ‘You Bet Your Life.’ Groucho Marx hosted ‘You Bet Your Life.’ I wanted to be related to Groucho Marx.
Tarzan was my favorite movie. Maybe it was the jungle. I don’t know. I found the whole thing erotic. What can I say. . . I wanted to be Johnny Sheffield. . . Tarzan’s teenage sidekick.
My favorite baseball player. Jimmy Piersall. He played for the Red Sox. I was told he was touched. I didn’t know what “touched” meant. (Still a little too early for a psychiatrist.)
Jimmy once hit a home run and ran around the bases backwards. He went to third base instead of first. He went around the bases THE WRONG WAY. Jimmy would later check himself into an “institution” and when he got out, would wind up working for one of my uncles who managed business affairs for Ted Williams. (Williams was a straight arrow outfield slugger for the Red Sox.) Jimmy ran the Stop & Shop grocery chain in New England and employed my mother as a food demonstrator. (My mother quit the OSS after it became the CIA. She used to tell me she would hide in closets. After fifteen years she thought she was a suit. That’s no joke. You know the rest).

My mother’s job was pretty strange. She looked like June Cleaver in an apron. She would stand behind a small folding tray and hand out space age food. She handed out samples of Marshmallow, Cool Whip, Beef Jerky, Mayonnaise, Kool-Aid, Fruit Loops.

Formative years.
They never leave you.
I was into Zorro. Soupy Sales. Astronauts. Cars. Little Richard.
When I say “into,” it’s what I remember. And when I say “formative,” I mean, memories. Suburban ’50s shit. I don’t resist it. Why should I? Even if I did, the shit would still somehow end up in my paintings.
Mad Magazine. Playboy. West Side Story. Ernie Kovacs. The Ed Sullivan Show. Jack Paar. The Cold War. Rod Serling. Brand new completely redesigned cars coming off an assembly line every year. It seeps in. It coats you. It’s what I know. And if you have anything to say, it’s probably best to stick to what you know.

The Canal Zone Paintings started off as a “pitch.” It was a story about a family starting out on an X-mas vacation . . . landing on the island of St. Bart’s and after they land they learn that the rest of the world has been nuked, blown apart by a nuclear holocaust. On The Beach meets Lord of the Flies meets 28 Days Later. This family isn’t getting off the island any time soon. In a couple of days a bottle of water is worth more than a Rolex.

That “pitch” is buried in parts of the Zone Paintings. Most of the “pitch” would take a back seat in 2007 and evolve more into painting and collaging images of Rastas and naked women after I came up with the idea about a reggae band gigging as the “house band” on one of those monster cruise ships anchored out beyond Gustavia harbor, styling to the sounds of Radiodread. (In my movie, the reggae band manages to escape before the ship is burned and brutalized for its stores and provisions and comes ashore and takes over the Manapany . . . one of seven hotels on the island that become “occupied” by different “tribes.”)

I went back to Panama for the first time in 2005.
I was curious.
I went to the outer edges of its boundaries.
I liked the jungles, the uninhabited parts of Panama. I was hoping for a connection that I wasn’t connected to.
I liked the city too. It looked tired and worn down, leftover. It looked like Saigon in 1966. There were a lot of clothes hanging from clotheslines that were strung out across cement terraces.

I’m not going to explain why there’re Rastas and naked women in the paintings, except to say . . . formality . . . and, one thing leads to another. You figure it out. For me art is about continuation, autobiography (the past), what’s right next to you (the present), and the skills to interpret feelings and sensations. There’re no mysteries. No secrets. I get it. And it’s about the only thing I get.

When I first showed the Canal Zone Paintings I thought they were cool, different . . . I had never seen them before. I found new techniques to marry inkjet and collage. I cut out huge reproductions of figures and painted on the back of the cut-outs, substituting the paint for glue and pasting the forms next to already inkjetted images and letting the excess paint leak out the sides and bottom of the cut-out after I dragged over the cuts with a silk-screen squeegee. The “leaks” of white paint were accidental. At first I thought I needed to get rid of the mistake. Cover it up. But I let it go. It didn’t take long to realize that the “mess” would let the viewer know exactly how the shapes got “stuck.” The compositions? A ribbon of figures. Starting from left to right. They were just hanging there in a field of wine-colored reds. I was working with figures that were originally reproduced in black-and-white. I wanted their noncolor to mix with a palette of grey and silver. The repros of women were supplied from friends. Dian Hanson, John McWhinnie, Richard Kern. One repro came from Eric Kroll. I gave each of them a small study in return for their giving.
I don’t want to talk about where the Rastas came from.
Like most images I work with they weren’t mine. I didn’t know anything about Rastas. I didn’t know anything about their culture or how they lived. I had plenty of time to find out. What I went with was the attraction. I liked their dreads. The way they were dressed . . . gym shorts and flip-flops. Their look and lifestyle gave off a vibe of freedom. Maybe I’m wrong about the freedom but I don’t give a shit about being wrong.

When I pasted the guitar onto the first Rasta . . . that was my way in. It was my CONTRIBUTION. It was like a new fig leaf. (I was reading a bio of the Beatles. The first guitar I pasted on was George Harrison’s Rickenbacker that came from one of those pictures they put in the middle of bios. Inside information.) I think this light bulb went off when I was staying on St. Barts in 2006. Maybe when I was sitting there looking out into the ocean, staring at one of those big-ass cruise ships.
I like iconic images.
I thought the Rasta and the oversized collaged guitar looked like it belonged. It looked as if I knew what I was doing. The two images fused and “married” into one new image and made up a whole new story.
www.gagosian.com