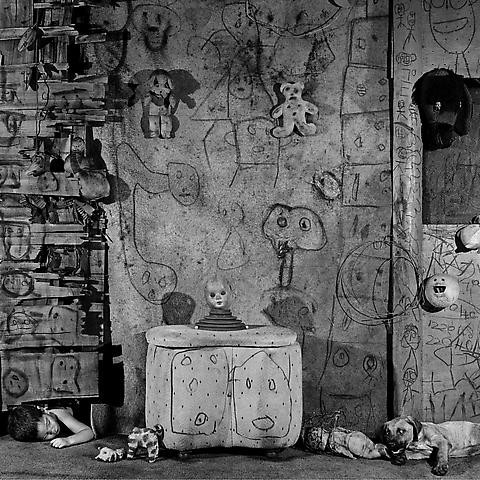 
It is difficult to explain this place except that I think it exists in some way or another in most people's mind.
--Roger Ballen

Gagosian Gallery is pleased to present "Boarding House," a new series of photographs by Roger Ballen taken between 2004 and 2008.

Ballen applies principles of sculpture, drawing, and painting to the psychologically evocative environments depicted in his theatrical photographs. Working exclusively in black and white, he examines the core sensations of the human psyche, based as much in fact as in fiction. Both a continuation and advancement of themes in his earlier series Outland (2001) and Shadow Chamber (2005), Boarding House emphasizes the absence of human presence and features obscured bodies, animals and hand-drawn faces whose minimal identifying characteristics initiate an immediate, visceral response. The Boarding House is a three-story warehouse hidden among the gold mines of Johannesburg and inhabited by disenfranchised, impoverished families, fugitives and witch doctors. Lacking walls, many rooms are separated only by rugs, blankets, and metal sheets. In his visually complex tableaux, Ballen forgoes a strictly documentary approach and casts further doubt on their veracity, intervening to alter each room, and collaborating directly with the subject to create the sculptures and drawings that appear in the photographs .

Ballen's unique artistic vocabulary, which he composes using a square format, creates visual ambiguities as universal metaphors of the human condition. A fixed truth in the Boarding House exists only within the viewer's psyche, as if the mind is playing tricks. In Pathos (2005), there is an apparent lack of human intervention, yet haunting evidence of remains 'left behind' where a ragged clothed monkey is placed against a threadbare rug. In Mimicry (2006), a child's naïve drawing traces the subject's arms. Paradoxical relationships wind through the series and culminate in Fragments (2005), where a plate of apples inscribed with a hand-drawn face sits below a pair of hovering feet, suggesting either a macabre end or a miraculous ascension.

Roger Ballen was born in New York in 1950 and lives and works in Johannesburg, South Africa. His work is represented in museum collections including the Victoria and Albert Museum, London, Centre Pompidou, Paris, and the Museum of Modern Art, New York. His work has been the subject of exhibitions at international institutions including the State Museum of Russia, St. Petersburg, 2004; Bibliotheque National, Paris, 2006; Deichtorhallen, Hamburg, 2007 and La Triennale di Milano, 2009.
www.gagosian.com