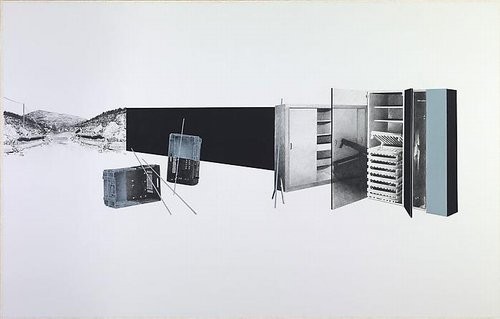 Opening reception for the artist: Thursday, March 25th, from 6 to 8 pm


The work is situated in an open space between matter and memory. This is where I wander and where the construction of a space linked to the development of psychic phenomena is expressed in twists in dimensions and intensities, in combinations that determine changes of pace and place the viewer on the threshold of a physical and mental experience, mobilizing his shoes as much as his mind.
--Tatiana Trouvé

Gagosian Gallery is pleased to announce an exhibition by Tatiana Trouvé. Acclaimed in France and Europe, this is Trouvé's first major exhibition in the U.S.

In her disquieting, dystopic installations, Trouvé limns the boundaries between mental and physical where time, space and memory converge. Her most recent work unites her interest in sculpture, architecture, and drawing in site-specific situations that combine scenographic wall drawings; sculptures in the form of linear abstractions worked in steel, rubber, and leather, or found objects such as bed frames, shoes, machine components, mattresses, and rocks "frozen" in time by casting or embellishing; and oddly scaled built spaces incorporating sealed windows, vents, and passages articulated by windows and angled mirrors. Trouvé depicts eviscerated interiors that echo once-vivid spaces and realities. The resulting "environmental dramas" are melancholy yet highly charged, oscillating between the real, the imaginary and the phantasmic. Although these environments contain no figures, human presence is inferred by sculptural elements resembling prosthetic equipment of various sorts, while time becomes palpable in the mysterious scorch marks and viscous smears on windows and walls.

In this exhibition, Trouvé has turned the fifth floor galleries into interrelated zones of transformation and interconnection. The "foyer" to the exhibition is pure mimicry, a bare room equipped with useless cast concrete radiators and simulated wall plumbing. From there, sinuous lines drawn in copper and aluminum lead from floor to wall into large graphite drawings in which detailed fragments of modernist interiors and objects are collaged with partial views of urban or natural landscapes to create disjunctive scenes of inexplicable dread; elsewhere the same lines sweep up and across space, materializing into three-dimensional convulsions of metal wire. An adjacent space is transformed into a giant vitrine, through which one can look from either end but not enter. The volume inside the two windows is partially bisected by another visible egress, indicating an elsewhere to which access is again denied.

Diverse yet equally compelling sculptures from Trouvé's recent repertoire complete this strange scenario, including Priapus (2010), a wooden billiard cue laced into a fetishistic leather sheath that leans against a wall apparently scorched by its contact; Untitled (2009) a tangle of miraculously erect electrical cords, plugged into each other to form a closed circuit of pure entropy; Mattress (2009), a massive concrete cast lashed tightly to a pillar and the equally insidious Cushion (2009), stuffed between pillar and wall.

An illustrated folder with an essay by Kara Vander Weg will be available during the exhibition.