The Private Collection of Robert Rauschenberg 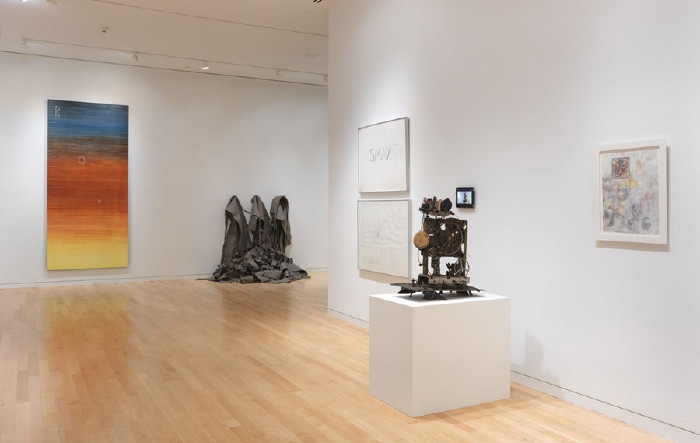 An artist’s collection is a rare resource, charged with anecdotes of how and why and where works were acquired, as well as whether they represented epistemic interests, or they were used for reference in the creation of new works. This fascinating exhibition provides special insight into Rauschenberg’s broader inspirations as well as his friendships and affinities, the causes he supported, and his personal philanthropic initiatives.

A game-changing figure in post-war American art, Rauschenberg bridged all traditional boundaries between medium and genre and forever changed the relationship between artist, image, and viewer. He quickly identified as his driving energies and motivations the incidental, the immediate, and the perception of a presence greater than his own artistic virtuosity. Rauschenberg truly believed in the communicative and transformative potential of art and throughout his life he devoted his creative energies equally to artistic and philanthropic activities. In 1970 he founded Change, Inc. to assist artists financially in emergency situations, and in the 1980s he inaugurated ROCI (Rauschenberg Overseas Culture Interchange), a pattern-breaking, collaborative, global exhibition project that forged entirely new artistic territory in international dialogue and peace-keeping. In 1990 he formed the Robert Rauschenberg Foundation to benefit and promote awareness of the causes and groups close to his heart. Activities included educational art programs, environmental and humanitarian campaigns, as well as grants and direct assistance to artistic collaborations. Since Rauschenberg’s death in 2008, the Foundation is responsible for maintaining this legacy as well as the expansion of philanthropic activities consistent with his personal view that “Art can change the world.”

Some of these artworks—such as Duchamp’s Bottlerack (1960), Cage’s original scores, Marden’s Choice (1967), and Ruscha’s Romeo, With Contraceptive Ghost (1980), represent milestones in recent contemporary art history; others, such as Warhol’s Portrait of Robert Rauschenberg (1967), John Chamberlain’s jewel-like sculpture Homer (1960) and Trisha Brown’s vigorous notations are of a different order, intimate and highly personal, though no less potent. Whether masterpiece or token in the general order of things, Rauschenberg ascribed equal importance to all and this exhibition of the art with which he surrounded himself seeks to reflect the breadth, openness and sincerity of his vision.
www.gagosian.com