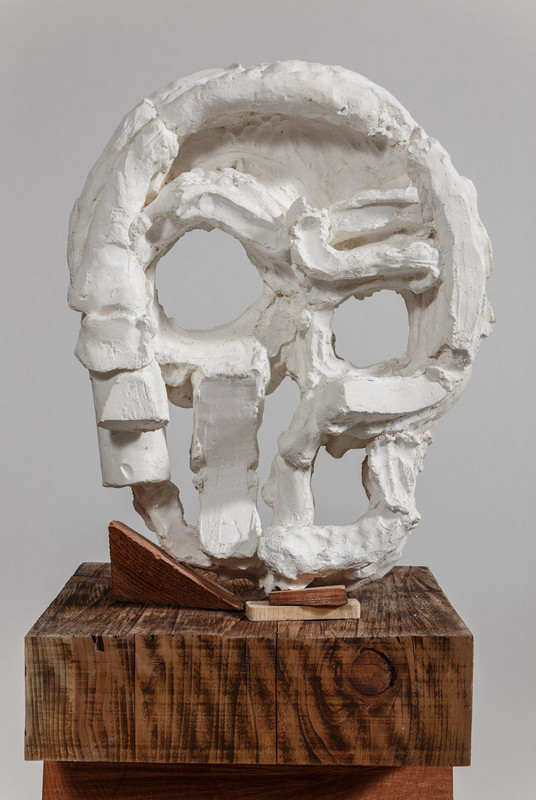 The masks began for me as works in themselves almost accidentally—they were "failed" heads for figurative works. I found myself hanging these pieces on the wall and noticing they had an importance. They were initially dramatizations of my struggle with what the face should or could look like. The face had gone through a radical transformation in the twentieth century. In the beginning, it wasn't about the cultural history of masks or the performative aspect, but just me trying to finish a sculpture, make it whole—believable. But as the work has developed I find myself more and more fascinated with the face in life, in my history, in art history, in culture and in performance. It becomes more and more elusive, more complex and fascinating. I've noticed I no longer believe in the photograph when it comes to describing a person and I feel art has a duty to try to make sense of our appearance. I believe that creative attempt has cultural, social and political dimensions.
—Thomas Houseago

Gagosian New York is pleased to present an exhibition of sculptures by Thomas Houseago, concurrent with and relating to his Public Art Fund commission Masks (Pentagon), on view at Rockefeller Center from April 28–June 12, 2015.

The title of the exhibition evokes the snake-haired female Gorgon of Greek mythology whose powerful gaze turned human flesh to stone—a reversal of the male gaze, and an allusion, perhaps, to the sculptor's vital struggle with formal precedents in the creative process. Shifting between historical allusion and seemingly impulsive gesture, Houseago explores sculptural paradigms in terms of the uncertain realities of the present. Foregoing bronze and marble for contingent materials such as plaster, hemp, iron rebar, plywood and jigsaw-cut panels printed with drawn limbs, he secretes stylistic nuances from a broad range of influences—from classical Greek sculpture; African, American, and Pacific tribal art; Renaissance and Modern interpretations of the figure to anime, sci-fi, musical performance, and cyborg characters.

Masks, in all their diversity, are a constant source of inspiration, from tribal ceremonial effigies, kabuto warrior helmets, and superhero disguises to David Bowie as Ziggy Stardust or George Clinton's Mothership Connection. In the new works, schematic plaster faces/skulls rest on ruggedly carved wooden pedestals, which are further contoured by lines drawn in charcoal. In Medusa Head (2015), one of these forms crowns a collapsing pile of visceral parts, a clay mound of sediment that includes Special Brew cans, Thunderbird bottles, and studio work shoes, among other things. The entire assemblage has been cast in two halves and the full process revealed and highlighted in the work (as in all his works), the process becoming part of the image itself and of the experience of looking.

Houseago's works evince a myriad of sculptural references: the rough surfaces recall unearthed classical artifacts while the underlying principles—the confrontation of structure and l'informe; rustic and refined; pedestal and sculpture—attest to the influence of modern and contemporary masters such as Giacometti, Gaudier-Brzeska, Brancusi, Picasso, and West. In the dense wall-mounted reliefs measuring up to 5 1/2 feet tall by almost 4 feet wide, an eye is represented by a striated depression, a mouth by a curving row of jagged triangles. Hunks of plaster cede to unfinished edges and loose strands of hemp. Sculptural mass is imbued with the fluid energy of painting, while recalling the fragments of artifacts where imposing forms have succumbed to the vicissitudes of time's passage.

In the outdoor installation Masks (Pentagon) (2015), Houseago expands upon these ideas with five monumental masks forming a mysterious circular enclosure in the center of bustling Rockefeller Plaza. As a discrete space in which artistic process is laid bare, this sculpted sanctuary becomes a direct extension of the studio. Cast from clay, the plaster elements are supported by exposed grids of rebar. Visitors are free to walk into the roofless five-sided structure through clefts between the massive mask-walls. Peering out at the modern cityscape through the large eyeholes and between the outer contours of each mask, the viewer becomes part of a physical experience where new and unexpected perspectives come into view, where the idea of looking and being looked at, being in a face or looking at a face, are dramatized.