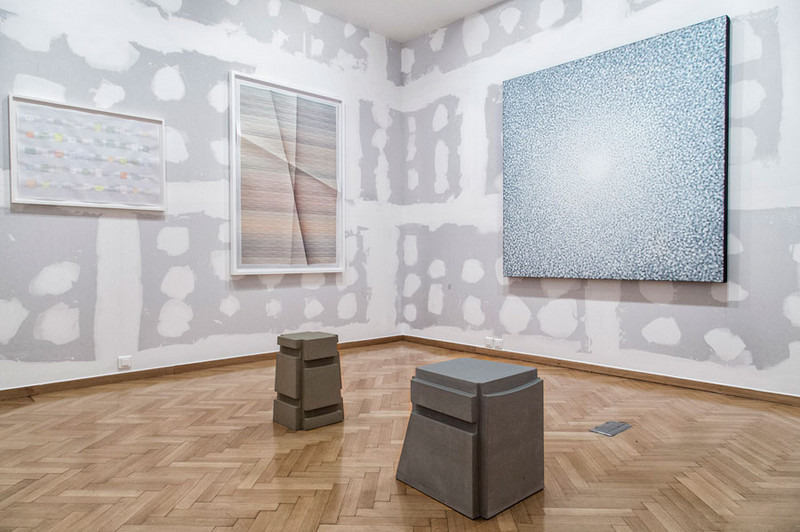 “Horror vacui” or “fear of empty spaces” is a term often used to describe outsider art, where every square inch of surface is filled with details and data in a compulsive excess of activity—perhaps in fear of that blank space that might stare back. In opposing the void every particle is given form. "Horror vacui" proposes Op Art as a side effect of this embattled triage of hand, eye and mind, where mark-making is a means with which to fill space with optically rich results.

As an antidote to aesthetic gratification, Marcel Duchamp invented the Rotoreliefs in 1923. By satisfying the retina itself, they mesmerized the eye with gyrating spirals. The result was a hypnotic visual white noise as well as a false sense of depth or vortex. Duchamp enlisted his product in an inventors' fair, sure that this would reveal its niche market demographic. Not a single Rotorelief sold.

The white cube has long been a vacuum neutralized of the burdens of detail to become an unencumbered and timeless context for viewing art. Urs Fischer’s playful wallpaper imitates the appearance of raw sheetrock, an odd moment of past-life mimesis for the walls in a room that now communicates the sensation of an indeterminate space. The corners of rooms are where points converge and space is rendered functionally useless and thus often ignored. Joel Morrison’s shiny stainless steel corner piece converts this uselessness into a glaringly prominent strength. And the entire space itself, no matter how forgotten or invisible, is used as a sculptural material by artist Rachel Whiteread.

The hours spent applying and reapplying a totality of marks is evident in the dense graphite drawings of Nancy Rubins. Torn papers are rubbed vigorously with graphite so as to appear burnished like dull dark metal. Made by scribbling onto the paper contained inside of his pocket with a pencil cramped in his hand, William Anastasi’s Pocket Drawings act as a diaristic account of this space within everyday attire as an active site of mark-making. The late Roman Opalka spent a lifetime documenting time and space by painstakingly counting towards infinity. His Cartes de Voyage works on paper demonstrate his conviction, done outside the studio out of necessity.

Obsessive repetition and unconscious doodling can reveal potent optical fields that bend the flatness of the canvas with personal codes and pattern-based rhythms. Harmony Korine’s check paintings aggressively undulate in trippy, all-encompassing topographies of lopsided gingham. The Aggregates of John Houck rethink the pixel via recursive means, as a series of possible combinations worked out to an infinitesimally extreme end.