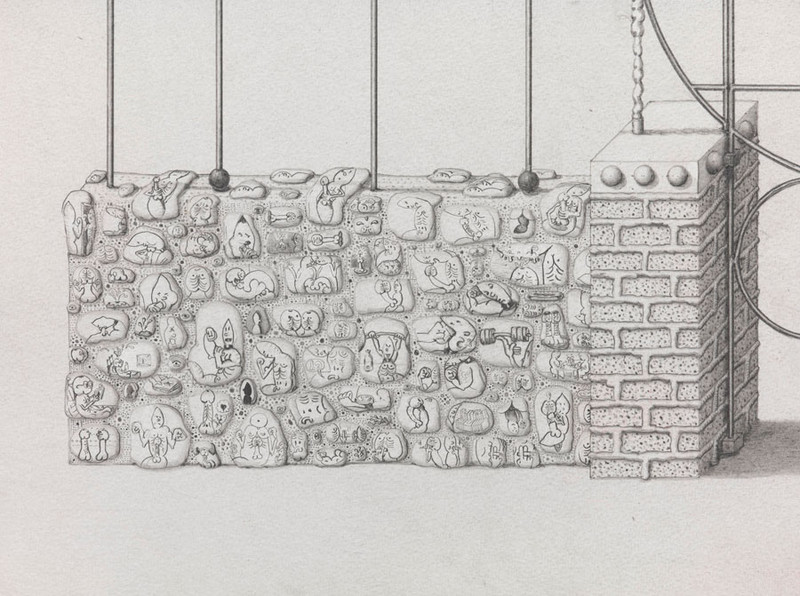 Gagosian Gallery is pleased to present “The Gates”, an extension of Paul Noble’s immersive “Welcome to Nobson” exhibited at Gagosian Britannia Street, London in 2011.

Welcome to Nobson (2008–11) mapped the artist’s imaginings of the dystopian Nobson Newtown. Having observed this vast and diverse civilisation from dizzying heights and oblique perspectives, we now find ourselves at its gates.

Guardians of the city, the Gates are a family (Mr., Mrs., Mr. & Mrs., Mr. & Mr., Mrs. & Mrs. and Master Gates). Representing both entrance and exit, they facilitate and deny access, assisting and obstructing. But the nothingness visible beyond Noble’s gates causes the viewer to question if he is somewhere or nowhere.

Noble’s works all begin fundamentally as designs or drafts, employing ancient and modern philosophies; in this case, the transcendent theme of the icon, sacred and profane. Nobsunshine (2009–10) glorifies that which gives life, alluding both to divine light and the pagan worship of the entity. And yet this spiritual experience is punctuated by the familiar language of Western art. Noble’s Volume drawings are obsessively detailed compositions in pencil, each a multi-layered representation of every Henry Moore sculpture from one volume of the late sculptor’s catalogue raisonné. In Small Couple (2011) and Small Three Prone (2012), herms depicted in the drawings become invented deities sculpted in solid marble. Here, Noble materialises his inner vision—a fictional pantheon for contemplation and immersion—in a medium with monumental connotations.