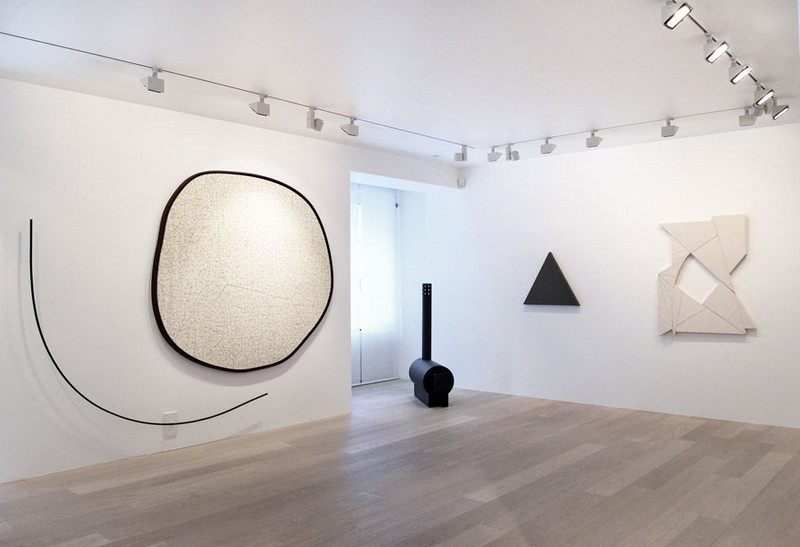 Chromophobia manifests itself in the many and varied attempts to purge color from culture, to devalue color, to diminish its significance, to deny its complexity.
—David Batchelor

In his book Chromophobia (2000), Batchelor identifies a widespread suppression of color in Western art and culture, investigating how and why artists, architects, and authors might reject color as a principal strategy or in specific works. Taking his diagnosis as a curatorial conceit, the exhibition brings together paintings, sculptures, and works on paper in which artists eschew color thus emphasizing form, process, and medium.

Some artists employ black and white to represent illusionary voids and negative space or, conversely, real physicality. In Volume (1959), a black canvas with holes by Milanese painter Dadamaino, the gallery wall is engaged as a compositional element; in Achrome (1958), Piero Manzoni covered the canvas with rough gesso mixed with glue and kaolin, then draped it over a support where it sagged and creased as it dried. Richard Serra’s Slow Weight (1993), a black rectangle described in thick oil-stick on paper, asserts a palpable olfactory and sculptural presence in space.

Bringing an extreme punk sensibility to bear on the history of abstraction, from the late 1970s Steven Parrino began to disrupt the conventional rectangular plane by puncturing or twisting it, or using dark automotive paints to convey enigmatic portals. In works produced specifically for this exhibition, Blair Thurman similarly probes the boundaries of the painted surface by combining paint with neon tubes, while Davide Balula uses industrial chemicals to prime the canvas, then allows incidental organic residue to take hold; in his sculpture Coloring the Wi-Fi (2015), Balula aims to make colour immaterial, transposing it into radio waves that can be captured digitally.

Rachel Whiteread's representations of negative space often take the form of delicately colored resin casts, but in a rare untitled ceramic work of 2000–01 she plays with the relationship between inside and outside in high contrast black and white. Edmund de Waal engages the space around and between his handmade pots in a different way, recasting the traditional medium in minimalist sequences set in monochrome black or white cabinets. Sterling Ruby’s sullen black Stove (2013) is fully functional, commemorating his childhood hearth and home in rural Pennsylvania.

Citing Frank Stella’s aim “to keep the paint as good as it was in the can,” Batchelor describes the widespread deployment of industrial and household paints during the 1960s as predictive of a seismic shift in painting—including the unprecedented avoidance by some artists of any trace of the hand. In the late 1980s, Christopher Wool began to use stencils and novelty paint rollers to apply block text and all-over decorative patterns to paper, canvas, and panels of aluminum painted white. Between 1966 and 1974, Olivier Mosset produced more than 200 identical paintings of a small black circle at the center of white canvas, demonstrating his persistent quest for ambivalence as formal purity—an attitude he later epitomized with Untitled (2010), an imposing blank canvas coated in white polyurethane.

The works in this exhibition are not passively colorless; instead they deliberately employ the characteristics of newness, absoluteness, nothingness, and infinity that black and white can convey.
www.gagosian.com