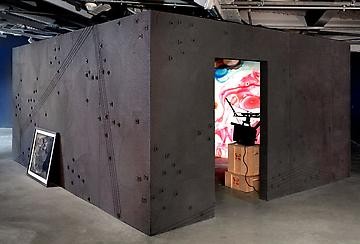 Using the strategies of accumulation, saturation, and the repetitive mark, these artists explore their fascination with image-saturated space and “alloverness,” from the delicate controlled lines of Richard Wright’s untitled drawing (2005) to the jostling interaction of Andy Warhol’s Silver Clouds (1994); from Carsten Höller’s Wonderful (2008), which charges its surroundings and assaults the senses with nerve-shattering flashing lights to Pierre Huyghe’s more meditative video installation Les Grands Ensembles (The Housing Project, 2001), in which the exterior view of an apartment pulses with light, building to a patterned visual crescendo that envelops the screen.

Works by Edgar Cleijne and Ellen Gallagher, Yayoi Kusama, and Aaron Curry are immersive environments, Chinese-box style: Cleijne/Gallagher’s latest installation Osedax (2011) – referring to a type of deep-sea bone-eating worm - is a free-standing room containing a continuous projection of 16mm film footage alongside slide projections of fragmented accumulations. A set of intricate photogravures with the same title feature hand-stamping as well as cut-and-collaged bas relief on Japanese paper. Kusama’s Reach Up to the Universe, Dotted Pumpkin (2011) conflates two of her favorite motifs, the mirror and the pumpkin, which she has described as a sort of alter-ego. A hollow form cast in aluminum, highly polished, and perforated with holes to reveal a light blue interior, Reach Up... is installed in a matched monochrome environment dotted with convex mirrors of varying sizes, so that sculpture and environment endlessly reflect and multiply each other and the viewers moving between them. In Aaron Curry’s untitled installation, free-standing figures made of silkscreened plywood advance and recede against whimsical graphic backgrounds.
www.gagosian.com