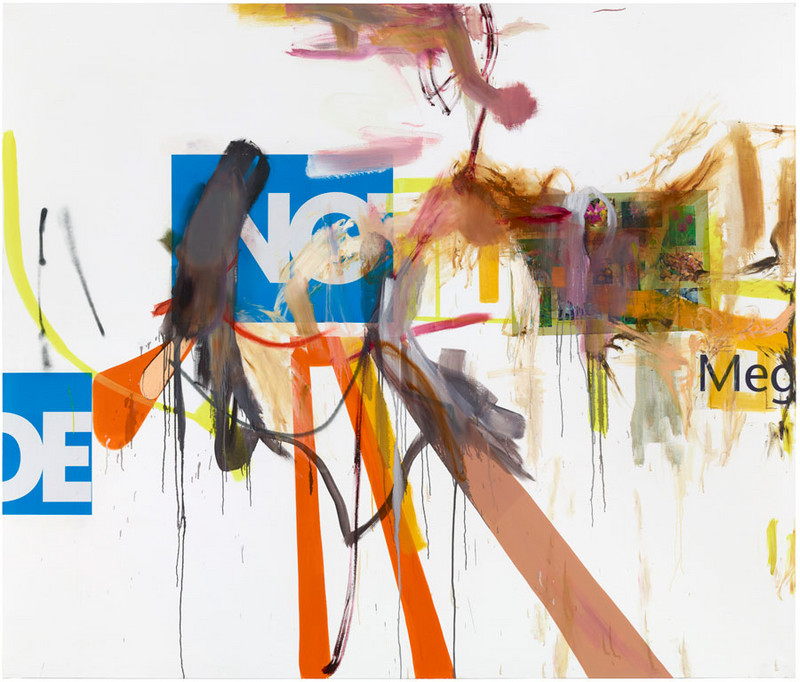 Gagosian Beverly Hills is pleased to present a major exhibition of new and recent paintings by Albert Oehlen.

For Oehlen, the practice of painting and its inherent unpredictability is a subject in itself. The guiding principles of his method are impulse and eclecticism, while his tools are fingers, brushes, collage, and computer. He treats abstraction as either gesture or geometry, superimposed, in combination, or conflated with a figurative register, as in readymade posters covered in smudges and stains. Pictorial form is a trigger rather than an end in itself.

Oehlen often begins by imposing a set of rules or structural limitations. In some paintings, landscapes lurk in messy patches of paint; fleeting visions are provoked and just as quickly abandoned. Collage is both a conceptual and formal construct, from the heterogeneous combining of elements to the damaged or torn signs and magazine advertisements that form the foundations of his paintings and eventually fuse with the painted surface, composed of seemingly informal gestures, swipes, and erasures, awkward drawing, and the occasional crude cartoon. Nothing coheres in a way that could be said to have substantive narrative dimension or pictorial legibility, except for visible stops and starts that prod the limits of content.

In a new series of huge four-part aluminum panel paintings, rendered in a simple, striking palette of red, black, and white, Oehlen creates tree-like forms as vehicles for a methodical deflation of content. The tree has been a recurring motif since the 1980s; the isolated, more literal trees in paintings such as Untitled (1989) undermine the common role of identifiable images through “bad” painting. In the new schematic forms, trunks and branches are silhouettes that suggest the digital marks of art and design software, although they have been meticulously handpainted in oil paint. Flattening surface, color, and content through cut-and-paste reimaginings of a fundamental natural structure, Oehlen calls the most essential tools of painting into question.

In recent Finger Paintings, color-blocked advertisements are an extension of the canvas, providing fragmented, readymade surfaces for Oehlen’s visceral markings, made with his hands, as well as brushes, rags, and spray-cans. Oehlen exuberantly demonstrates a tension between man- and machine-made imagery, while branch-like sprays mitigate any sense of pure abstraction. Open-ended, "unfinished" dialogues between binary oppositions are unsettling yet compelling: in any one work, the paint, the collaged pictures and texts, and patches of white canvas each occupy their own space, like a worktable clutter without a center. The provisional appearance of the surfaces gives way to mesmerizing color-layers of graffiti—a testament to Oehlen’s ability to elevate common genres and materials through rigorous experimentation.

The exhibition is accompanied by a forthcoming fully illustrated catalogue with an essay by Daniel Baumann, a discussion between Oehlen and Alexander Klar, and a photo essay by Esther Freund.

An exhibition of Oehlen's work from the 1980s to today will be on view at Museum Wiesbaden, Germany from June 21–September 21, 2014.
www.gagosian.com