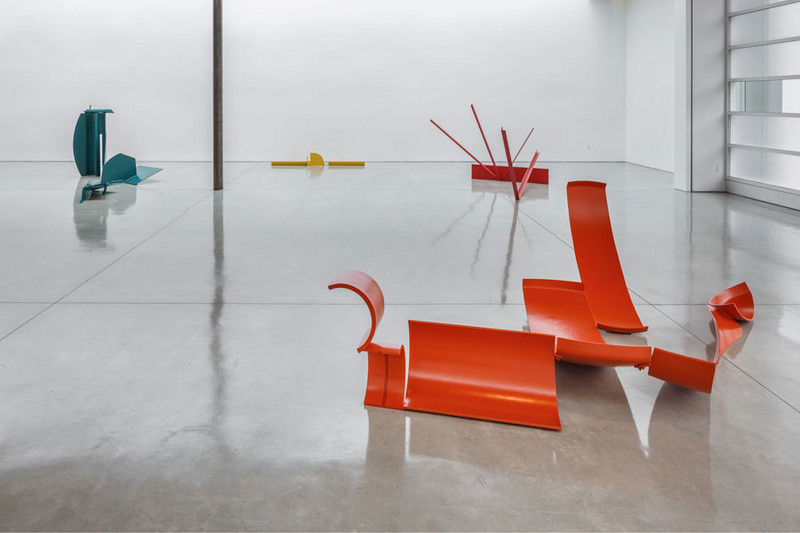 I didn’t want them to be anything, to have the graspability of a figure or a statue. They had to be something that you really took time to understand visually and emotionally.
—Anthony Caro

Gagosian Beverly Hills is pleased to present thirteen early sculptures by the late Anthony Caro, some of which have never been seen in the United States. The exhibition has been prepared in close collaboration with the Anthony Caro studio.

Over the course of his sixty-year career, Caro continuously reimagined the relationship between viewer and sculpture. From his beginnings as an assistant to Henry Moore during the early 1950s, he worked to contort the figure to the brink of abstraction. Subsequent decisions to bypass representational imagery altogether, and to use bright colors to synthesize the bolted and welded metal parts that replaced it, marked a breakthrough in Caro’s quest to elicit a charged response that was as optical as it was corporeal. His rejection of the pedestal to place his works directly on the gallery floor, which resulted in a direct, one-to-one relationship between viewer and artwork, was perhaps his most radical and innovative revision of sculptural tradition.

Following a pivotal trip to the U.S. in 1959, Caro began a new approach to form, color, and presentation. Inspired by David Smith’s transposing of impulsive painterly lines into welded and forged metal, he cultivated an original lyricism from industrial steel and aluminum parts. His exuberant sculptures of the period unfold within the personal space of the viewer, shifting dramatically in appearance as s/he walks around them; although they mark a departure from the figure as subject, a sense of liberation from the concentrated weight, scale, and ordered naturalism of the body endures. The works are characterized by tensions between elements that are upright and leaning; rigid and curved; rectilinear and inflected, from the bright orange Capital (1960), in which a large steel square levitates beside fixed, level components; to Drop (1966), a straight yellow beam interrupted by an incongruous curve. In 1966, Caro commenced a series of Table Pieces: welded amalgams of hand tools and other parts that arc beyond and below the surfaces on which they sit.

Six of the sculptures in the current exhibition—including Month of May (1963) and The Window (1966–67)—were included in one or both of Caro’s first solo museum exhibitions in London, at the Whitechapel Gallery in 1963 and the Hayward Gallery in 1969. This is the first time that Purling (1969) has ever been shown.

Caro’s constant reinvention of the language of sculpture, as well as his influential teaching career at St. Martin’s School of Art, distinguished him as the successor both to Henry Moore and to David Smith, and as a tireless innovator who transformed sculpture through his lifelong investigation of how it is actually experienced.

The exhibition is accompanied by a fully illustrated catalogue with a new essay by Tim Marlow and a key text by Rosalind Krauss.