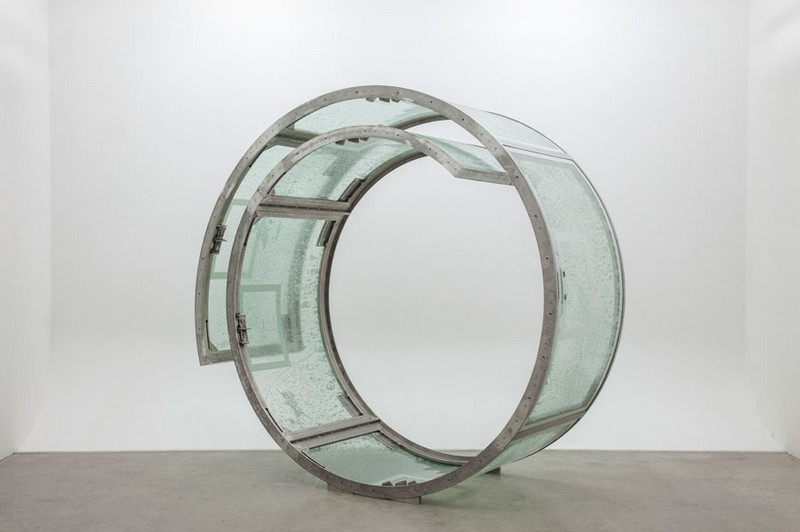 I was no longer in the water but rather I was high above the water and looking down upon it. The sky, that had been so grey and lowering, was iridescent with indescribable beauty. Waves of ecstatic and delicate color vibrated around me and lulled me to a sense of peace beyond comprehensions.
—Case No. 562—Robert Kyle Beggs
Case-Book of Astral Projection, 545-746, by Dr. Robert Crookall, 1972

I think the descriptions of near-death experience, descriptions of light phenomena in the dream, and in waking ... I don't pretend to have a religious art, but I have to say, it is artists who worked that territory from the very beginning.
—James Turrell, 1999

The late 1960s saw the emergence of the California Light and Space Movement, tangential to Minimalism, with protagonists such as James Turrell, Larry Bell, and De Wain Valentine. They created works predicated on the extrasensory potential of light by using the space within and around it as an immersive frame, heightening the viewer’s awareness of the mind-body experience. “CLEAR” imagines a continuation of this narrative, suggesting astral projection—leaving one’s physical body to inhabit an “astral” one—as an endgame. The exhibition explores apertures both material and conceptual, as well as the rich sensibilities that visualize the science and fantasy of aesthetic experience and popular imagination.

Photographic works take the sky as a subject or vantage point, capturing heavenly bodies from light years away. Light and cosmic mystery converge in Lisa Oppenheim’s Heliograms (2013), with their abstract sun-spotting, and the starry firmament of Thomas Ruff’s Sterne (1989–92). Andreas Gursky’s Ocean IV (2010) is a god's eye view of the sublime nether region between the Horn of Africa and Antarctica, improbably compressed within a single frame.

Since Narcissus’ first reflection in the gazing pool, the mirror has offered glimpses of a parallel reality. Douglas Gordon’s Everything is Nothing Without its Reflection: A Photographic Pantomime (2014) presents a diary of poignant photographic images interspersed with identically framed mirrors; thus in the process of looking the viewer is drawn in as an active player in the visual drama. Upon passing through the looking-glass, Alice contemplated the qualities of “mirror milk” in the chiral sameness before her: the same conundrum underscores Michael Craig-Martin’s iconic conceptual work An Oak Tree (1972). Notions of duality also inform Gianni Motti’s six-hour film titled HIGGS—Looking for the Anti-Motti (2005), which shows the artist walking through the Large Hadron Collider at CERN. Here, science and fiction meet face-to-face in the 30-kilometer tunnel that loops beneath Geneva, where particles are accelerated into divine ether.

In 1971, artist and psychic Ingo Swann coined the term “remote viewing” to describe his ability to consciously leave his body and visit places both tangible and unknown. Swann’s collaboration with the Stanford Research Institute, and eventually the CIA—in what was later declassified as the “Stargate Project”—bridged science and fiction and became his prime artistic motivation, resulting in paintings such as Cosmic Egg (1994). Since the earliest recordings of astral projection, one third of all accounts report a silver umbilical cord tethering the subject to the physical body while floating in the astral plane—literalized in Jason Metcalf’s sculpture A Silver Cord (2014). Were the mind’s full capacity to be accessible, total clarity would allow the visualization of multi-verses, such as Jorinde Voigt’s large-scale algorithmic drawings, which suggest an omniscient pattern of interplanar activity, or Mark Lombardi’s detailed constellations of global conspiracy. Ranging from x-ray vision to astral projection and the cosmos, “CLEAR” treats translucence as an avenue to transcendence.