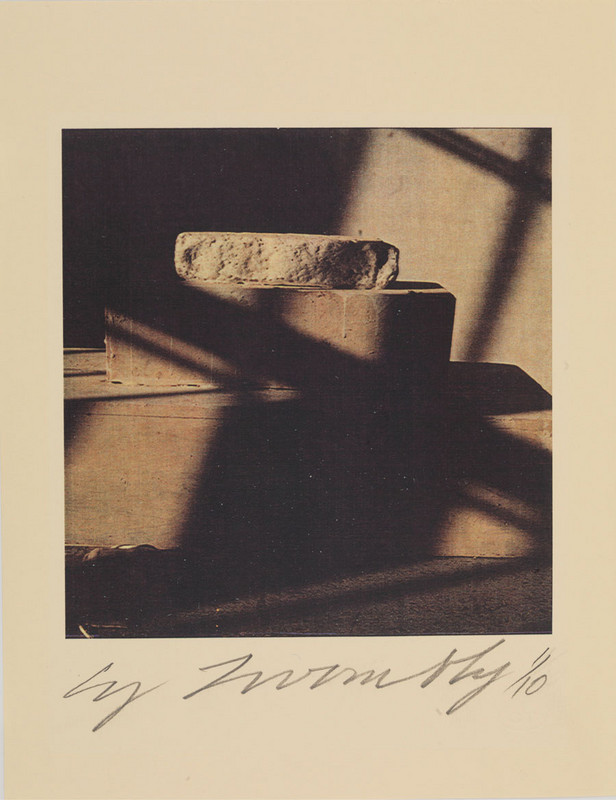 In tribute to the late Cy Twombly, Gagosian Gallery is proud to present his last paintings and one hundred of his photographs, ranging from early studio impressions from the 1950s to a group of landscape subjects that he took in St Barths last year. Since 2008, major exhibitions of Twombly’s intimate photographs have been held at FOAM Amsterdam, Museum Brandhorst, Munich and the Palais des Beaux Arts, Brussels; however this is the first time that the lesser known aspect of his oeuvre has been presented in such depth in the U.S.

Twombly remains one of the world’s most revered contemporary artists, whose central and ongoing relevance to the art of the present is attested to by a stream of recent survey exhibitions in leading international institutions. Since the opening of the first Gagosian Gallery in New York in the mid-eighties, Twombly has been a cornerstone of the gallery. He made many exhibitions there over the last twenty-five years, each one as surprising and memorable as the last, from the Bolsena Paintings (1990) to The Coronation of Sesostris (2001) to Lepanto (2002), Bacchus (2007), and The Rose (2009). Ten Sculptures and a Painting (2003), Three Notes for Salalah (2007), Leaving Paphos Ringed with Waves (2009), and Camino Real (2010) inaugurated new galleries in London, Rome, Athens, and Paris respectively.

After Los Angeles, this exhibition will travel to Gagosian Gallery locations in Hong Kong, London, and New York through 2012.

A fully illustrated catalogue of the paintings accompanies the exhibition, with essays by Achim Hochdorfer, curator of “Cy Twombly: States of Mind” at Museum Moderner Kunst Stiftung Ludwig Wien in 2009; curator Julie Sylvester, and a photo essay by Sally Mann. A fully illustrated catalogue of the photographs with an essay by Edmund de Waal, author of The Hare with the Amber Eyes, is forthcoming.

Cy Twombly (1928–2011) was born in 1928 in Lexington, Virginia. He studied at the School of the Museum of Fine Arts, Boston (1947–49); the Art Students League, New York (1950–51); and Black Mountain College, North Carolina (1951–52). In the mid-1950s, following travels in Europe and Africa, he emerged as a prominent figure among a group of artists working in New York that included Robert Rauschenberg and Jasper Johns. In 1968, the Milwaukee Art Center mounted his first retrospective. This was followed by major retrospectives at the Kunsthaus Zürich (1987) travelling to Madrid, London and Paris; the Museum of Modern Art, New York (1994) (travelling to Houston, Los Angeles, and Berlin) and the Pinakothek der Moderne in Munich (2006). In 1995, the Cy Twombly Gallery opened at The Menil Collection, Houston, exhibiting works made by the artist since 1954. The European retrospective "Cy Twombly: Cycles and Seasons" opened at the Tate Modern, London in June 2008, with subsequent versions at the Guggenheim Bilbao and the Museum of Modern Art in Rome in 2009. Recent exhibitions include "Cy Twombly: The Natural World, Selected Works 2000-2007," The Art Institute of Chicago (2009) and "Sensations of the Moment," the Museum Moderner Kunst Stiftung Ludwig, Vienna, (2009). In 2010, Twombly’s permanent site-specific painting, Ceiling was unveiled in the Salle des Bronzes at the Musée du Louvre. At the same time he was made Chevalier of the Légion d’Honneur by the French government.

Six Twombly sculptures dating from 1979 to 1997 are currently on view at the Philadelphia Museum of Art, through March 2013. The installation was specifically conceived by the artist as a dialogue with his celebrated series of ten paintings “Fifty Days at Iliam” (1978) which is permanently displayed at the museum.
www.gagosian.com