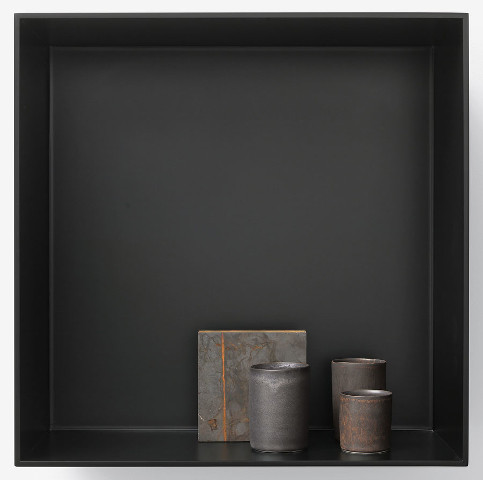 For this new body of work, I have made a series of conversations about materials with architectural space. How people walk through spaces, how they encounter what I make, how it is possible to make work to pause the world a little, is my imperative. At its core is one simple question: it is about what it means to belong in one place at one time.
—Edmund de Waal

De Waal's art and literature speak to his enduring fascination with the nature of objects, and the narratives of their collection and display. A potter since childhood and an acclaimed writer, his obsession with porcelain or “white gold” has led to encounters with many people and places that help deepen his understanding of the nature of the material. His latest book, The White Road: Journey into an Obsession (2015), traces the historical evolution of porcelain from its origin in Jingdezhen, China, through developments in Venice, Versailles, Dresden, Cornwall, and the Cherokee Country of South Carolina.

From simple pairs to complex multitudes of small objects, de Waal draws inspiration from many sources, including the poetry of Paul Celan and the musical compositions of John Cage. At the heart of this exhibition is a series of responses to the Schindler House on Kings Road in Los Angeles; a revolutionary building from 1922 by the Viennese émigré architect, Rudolph Schindler. For de Waal, the Schindler House is “improvisatory architecture,” which offered a new way of living and working, a new set of possibilities for materials, a new architecture for a new city. It was here that, according to de Waal, Cage "began to clear his mind."

The exhibition title “ten thousand things” derives from a longer phrase by Cage about work, endless repetition, and unfolding, a citation inspired by the Taoist metaphor of indefinite multitude that underscores Chinese modular patterns of thought. In de Waal's work, this is borne out in sequences of thrown porcelain vessels glazed in shades of white, cream, celadon, and a newly developed palette of textured, metallic black glazes contained by various framing devices in steel and aluminum. De Waal connects his interest in recent sculpture, from Donald Judd's sequenced forms to Richard Serra's molten lead splashes, with a new emphasis on the architectural space that his own objects inhabit, including the measured intervals and pauses between them. For the first time, de Waal combines his porcelain with steel, lead, and plaster blocks, creating a new kind of dialogue between raw materials within a sculptural framework and the architectural space that they occupy.

Three large-scale works are influenced by de Waal's readings of Celan: Lichtzwang (2014), a response to the Theseus Temple in Vienna; a place made fast (2014), a single unit housing 160 pots; and black milk (2015), a black-glazed diptych containing 237 taller vessels. Composition for three voices (2015) is linked specifically to the story of Cage's relationship with Rudolph and Pauline Schindler during the time that he lived with them in their idiosyncratic modern home; while ten thousand things, for John Cage I–XX (2015) proposes a sequential structure with twenty open aluminum boxes containing different arrangements of pots.

The exhibition is accompanied by a fully illustrated catalogue with an essay by Joan Simon.