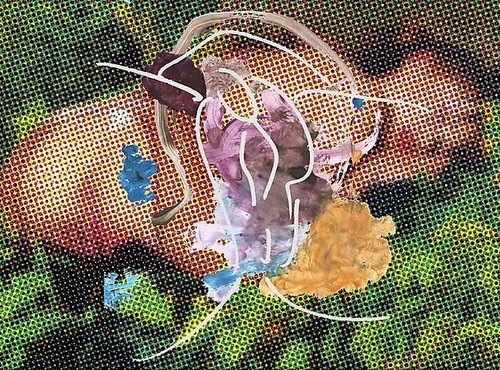 Opening reception for the artist: Saturday, November 14th, from 3 to 5 pm

The gesture that you end up making in the world happens through instinct and all these desires for procreation. The greatest beauty is the acceptance of nature and how things function.
--Jeff Koons

Gagosian Gallery is pleased to present a series of recent paintings by Jeff Koons.

Koons' new paintings are ambitious in their breadth. They engage in a dialogue with cultural history that is at once visual, intellectual, biological, and philosophical, as well as with art history, from the Venus of Willendorf to Gustave Courbet and Salvador Dali. At first glance the works may seem abstract and gestural, but at the same time they are embedded in the traditions of figurative painting. The brush strokes, which are photorealistic in their application, are actually fake brush strokes in the style of Roy Lichtenstein -- but at the same time they support the totality of gesture and action in life itself. The visual quality of Cy Twombly's work is a reference as is its embodiment of the existential issues of what it means to be an artist. The depth in these paintings is figurative depth; the painted dots create holograms, giving an illusion of depth of field that is similar to that which exists between the viewer's plane and the figure in Courbet's L'Origine du Monde. The dot overlay represents past technologies, like color television, to remind the viewer of change and mortality. Through his ongoing exploration of cultural history and sexuality, Koons draws attention to time past, present, and future.

From the outset of his controversial career, Koons turned the traditional notion of the work of art and its context inside out. Focusing on unexpected yet banal objects as models for his work, from vacuum cleaners and inflatable flowers to novelty drink caddies, china figurines, and children's toys, he eschewed typical standards of 'good taste' in art, instead embracing what he perceives as conventional middle-class values in order to expose the vulnerabilities of aesthetic hierarchies and value systems. Koons' declared strategies are to make art beautiful, to strive for objectivity, to give back the familiar, and to reflect -- and thus empower -- the viewer. Moving through various conceptual constructs including the new, the banal and the heavenly, his work has evolved from its literal, deadpan beginnings into visceral manifestations that dazzle the eye and confound the senses.

Jeff Koons was born in 1955 in York, Pennsylvania. He received his B.F.A. at the Maryland Institute College of Art in Baltimore and studied at the School of the Art Institute of Chicago. His work has been widely exhibited internationally in solo and group exhibitions. Recent solo shows include the Museo Archeologico Nazionale di Napoli (2003), the Astrup Fearnley Museum of Modern Art, Oslo (2004), which traveled to the Helsinki City Art Museum (2005); Museum of Contemporary Art, Chicago (2008); "Jeff Koons: Versailles", Chateâu de Versailles, France (2008); and the Neuer Nationalgalerie Berlin (2008-9). Koons lives and works in New York City.
www.gagosian.com