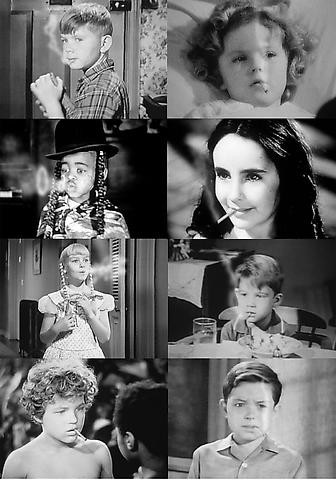 There is no such thing as a bad movie frame.
--John Waters

Gagosian Gallery is pleased to announce "Rear Projection", an exhibition of new photographs and sculpture by John Waters.
"Rear projection" is a movie term for the process whereby a foreground action is combined with a background scene filmed earlier to give the impression the actors are on location when they are, in fact, working inside a studio. In Waters' latest work, this artificial and outdated visual effect is embraced, attacked and taken to extremes.
Glorifying the struggle, humiliation, and wild excitement of a life in show business, Waters uses an insider's bag of film tricks and trade lingo to celebrate the excess of the movie industry. Rewriting and redirecting existing film imagery snapped off the TV screen, he assaults, elevates, subtitles, and startlingly alters these one time classic, respected, even honored movies to attain a new kind of equality: a cult film that only needs one viewer – John Waters himself. Child stars are given bad habits (Children Who Smoke); innocent movies are perverted by editing out just a few frames (Santa Molester); even traditionally beautiful movie stars are glamorously deformed by suspiciously over-budgeted charity advertising campaigns (Hollywood Smile Train). The cult of religion and the religion of cult are the same in Waters's world, as in The Process (a cult that worshipped both Satan and Jesus) and Idol #2, Waters's un-ironic beatification of singer Johnny Mathis. He sneaks into other movies like a spy to photograph the very details that their original directors didn't notice. Waters revels in the terrible frustrations of today's film business combined with the hostility that outsiders feel towards the contemporary art world, hoping to bring into focus a fresh breed of humor, cheap (but satisfying) sexual thrills, and a shabbily elevated artistic appreciation that must always start from the back of the line.
Waters's first artwork Divine in Ecstasy (1992) immortalized the peak of his favorite muse's rapture. This was followed by many other equally "perfect moments" from his own movies. Since then, he has transposed some of his most provocative themes and motifs concerning race, sex, gender, consumerism, and religion into photographs, montages, and, more recently, sculpture. Editing them from their original context, Waters recombines film stills into "little movies", as he calls his particular form of narrative sequence. Word and image play permeate his work, such as Ham, a photograph of a large glazed ham that he imagines hanging on the wall of a game thespian or casting agent; Catholic Sin is an illustration from his own childhood catechism book that equated the purity of the soul with fresh milk. Two oversized sculptures – Rush, a gigantic "popper" bottle and its spilled contents, and La Mer, a huge jar of the costly face cream Crème de la Mer, both of which Waters admits to using -- poke fun at the exaggerated promise and mythic status of recreational drugs and beauty products.
John Waters was born in 1946 in Baltimore, MD, where he continues to live and work. Exhibitions include the Wexner Center for the Arts, Columbus, OH (1999) and the New Museum of Contemporary Art (2004), traveling to Fotomuseum Winterthur, Switzerland; The Warhol Museum, Pittsburgh, PA; and the Orange County Museum of Art, Newport Beach, CA), 2004-2006. His filmography includes Pink Flamingos (1972), Desperate Living (1977), Polyester (1981), Hairspray (1988) and Pecker (1998).
www.gagosian.com