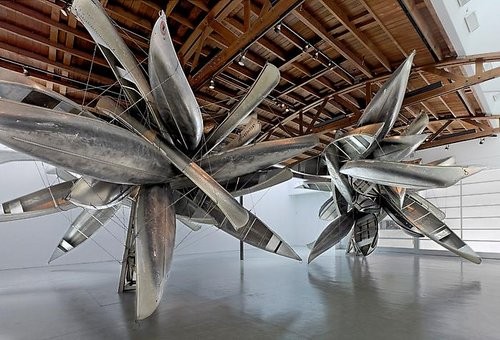 
We all have some history with boats, whether our grandparents came over that way or whether we used them as kids. The canoe, for example, is such a simple form, an ancient form. And it's 100 percent figurative, designed around the human figure.
--Nancy Rubins

Gagosian Gallery is pleased to announce "Skins, Structures, Landmasses," Nancy Rubins' first exhibition in Los Angeles since 2001. The exhibition will feature new sculptures, assembled on site at the gallery, drawings, and photographic collages.

A pre-eminent American sculptor, Rubins takes used or discarded industrial materials and objects and transforms them into monumental sculptures whose scale and forceful presence have an overwhelming physical impact. Rubins acts as an intermediary between the past and future states of her chosen materials, crafting them into sculptures while maintaining the discrete identities of their constituents. Her work incorporates objects of consumer culture that sometimes retain visible identifying logos, however she is most interested in their formal qualities and spatial potential than their brand. Her arrangements evoke a precarious equilibrium of objects in space, citing both the traditions of modernist American monumental sculpture as well as bricolage, which emphasize the aesthetic possibilities of quotidian objects. Using these diverse precedents as her foundations, she produces sculptures that brim with the entropic energies and forces of nature.

Boats entered Rubins' sculptural vocabulary in 2000, which she chose for their lightness, mobility, and dynamic structure, as well as their iconographical import. Two massive sculptures, Work for New Space, Stainless Steel, Aluminum, Monochrome I & II, are made up of a variety of used aluminum boats including canoes, insta-boats, jon boats, and rowboats. In both, wire cable connects the boats to each other and to the steel armature, forming a weblike structure of compression and tension that recalls Buckminster Fuller's notion of "tensegrity," where the whole is stronger than the parts. The seemingly monochromatic metal sculptures reveal a subtle yet rich patination on closer examination, from the dents and scrapes of incidental damage to stenciled serial numbers. In a nod to Brancusi that conflates Bird in Space with Endless Column, they rise away from the floor, cantilevering toward each other in mid-flight.

To complement the scale and mass of the sculptures, Rubins has produced a new body of large-scale drawings using the highly idiosyncratic method that she invented thirty years ago. Working on the floor, she covers large sheets of thick paper with layers of graphite until they turn into opaque fields of gunmetal-gray, animated by the forceful gestural marks of her hand moving rapidly across the paper. Then she adds further depth to her surfaces by incorporating techniques from collage and sculpture, tearing the paper roughly and gluing different sections together to create irregular, overlapping shapes that recall animal skins. Although these drawings are physically light, unframed works on paper, they read as leaden reliefs whose abstract planes engage with the walls, their undulations and folds projecting outward. As simple and direct as they are in terms of materials, they are complex in terms of process and the palpable accumulations of the time and energy required to produce them. Consequently Rubins describes her drawings as "batteries" or containers storing energy.

Consistent with her primary concern to energize space through sculptural intervention, Rubins has made collages from the colored photographs of boats in her inventory of sculptural materials. To further emphasize the formal autonomy of these lively works in which clustered motifs thrust outwards in all directions, Rubins has cut each collage away from its empty background and given it an aluminum sheet backing. In doing so, she has created an innovative hybrid form that hovers between two and three dimensions.