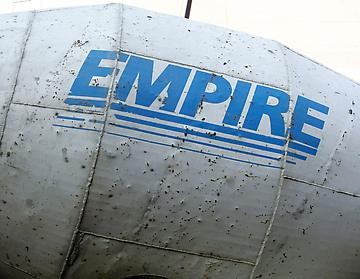 Gagosian Gallery is pleased to present an exhibition of recent photographs by Roe Ethridge.

The diverse and sometimes abstruse nature of Ethridge’s imagery -- vintage movie posters, fashion models, a pink rose, a mop bucket, a concrete mixer -- originates from his direct experience of the world, which oscillates between the spontaneous and the staged with such subtlety that it is often difficult to ascertain his elected approach with regard to individual images. His oeuvre melds conceptual photography with commercial work, including out-takes from his own shoots and borrowed images already in circulation in other contexts. With this democratic attitude, Ethridge works to capture the vivid and intimate details of his shifting locales within photography’s classic genres of portrait, landscape, and still life.

In this exhibition, he juxtaposes polished photographs of posed models, such as Marloes Horst (2010) and Louise (2011), with gritty still lifes of ashtrays (Butts 1, Butts 2, and Butts 3, 2010) and the grainy pages of a newspaper (Plane Crash at Sea, 2004-2011). Stairs 11 (2008), Concrete Pour 3 (2007), and Curtain Wall 10 (2010) are from a recent project commissioned by Goldman Sachs that documents the construction of the company’s new headquarters over a six-year period. Setting up a dialogue between the improvised and the premeditated, between autonomous and commissioned images, Ethridge creates an alternating flow of content and form. The title “Le Luxe,” which he has used to title a previous exhibition and a recent monograph, is inspired by the paradoxical French phrase that alludes to the superfluity of luxury while insisting on its necessity. It is also a direct reference to Henri Matisse’s masterpieces of the same name from 1907 and 1913.

In his ongoing exploration of picture-making, Ethridge disavows the potential for creating a finished work. Constructing perceivable gaps between subjects, he invites speculation on what has been omitted in terms of imagining an uninterrupted stream of sequential images. He edits the imagery strategically, setting up complex relationships between genres, yet keeping their precise significance undefined. Drawing upon photography’s descriptive power and its accessibility, he copies and re-combines images, subverting their original status in order to regenerate their signifying possibilities, and in so doing, infuse them with a new sense of mysterious contingency.

Roe Ethridge was born in 1969 in Miami and received a BFA in Photography at The College of Art in Atlanta, GA. His work has been shown extensively in the United States and internationally, including: Greater New York, MOMA/PS1 (2000), The Americans, Barbican Center, London (2001), Hello My Name Is..., Carnegie Museum of Art (2002), Momentum 4: Roe Ethridge, Institute of Contemporary Art, Boston (2005), The Whitney Biennial (2008), New Photography 2010: Roe Ethridge, Museum of Modern Art, New York (2010), and Les Recontres D’Arles, France (2011)
www.gagosian.com