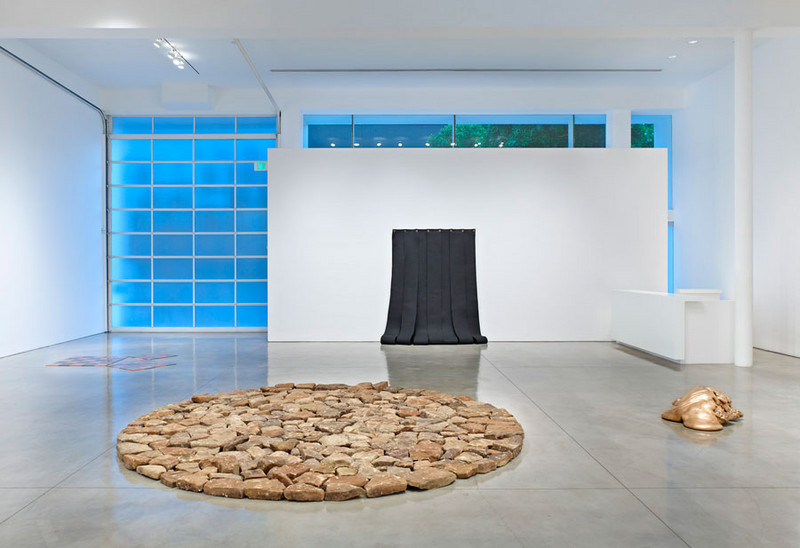 Gagosian Gallery is pleased to present "The Floor Show: Gravity and Materials," a group exhibition of floor-based sculpture organized in collaboration with curator Richard D. Marshall. "The Floor Show" explores the variety of ways contemporary artists have expanded the possibility of the sculptural medium by removing it from the once-compulsory pedestal.

In Andy Warhol's painting Dance Diagram (1962), he renders an appropriated diagram for ballroom dance steps on canvas. By installing the painting on the floor rather than the wall, Warhol transforms it into an interactive sculptural object that prefaces his stacked Brillo Boxes. From this early moment, the show bears witness to the ways in which placement on the floor has augured a wealth of thematic elaborations—addressing the effects of gravity, horizontality, randomness, and the physical qualities of materials.

Carl Andre, Robert Morris, Richard Serra and Robert Therrien have focused on materials and their interaction with the floor, taking advantage of their rigidity, flexibility, color, and texture. The precariously balanced steel components of Serra's Malmo Roll (1984) afford the piece a visceral thrill, the plinth-less sculpture highlights the inherent strength and beauty of its medium. In Morris' Untitled (1976), strips of grey felt, hung from the wall, spill onto the floor—thus showcasing the biomorphic textural response of the material's weight and folds to the force of gravity. Andre's The Void Enclosed by Lead and Copper Squares of Three, Four, and Five (1998) is composed of equally proportioned unfinished lead and copper squares, its careful placement on the floor creating an ideal perspective for viewing the literal illustration of the geometric principle Pythagorean triple. Therrien's No title (Pallet) (1997) is shaped like an industrial sleeping pallet, occupying its rightful place on the floor-however, its striking reflective surface transforms this familiar and banal shape into an object of beauty.

The younger generation of artists exhibited have continued to utilize the floor as the support for their work, but they often instill subjective and emotional content not explored by their predecessors. Rachel Whiteread's Black Bed (1991)—a cast polyurethane sculpture of a black mattress lying directly on the floor--startles with its disquieting intimacy and seeming reality. Felix Gonzalez-Torres's UNTITLED (SUMMER) (1993), which consists of a string of lights puddling on the floor, creates an object of memory and loss—reinforced by the light bulb's allusion to personal relationships, and their inexplicable tendency to burn out at different times. In Mike Kelley's Crooked Body (1993), an assemblage of stuffed children's toys is sewn together and strewn haphazardly on the floor to reference the internal despair and longing felt when an object of seeming adoration is quickly discarded. Tom Sachs's 4' x 8' Sheet of Plywood (2011) consists of perfectly square sheets of laminated plywood stacked on the floor. The physical labor represented by the plywood stack is a sacred and integral part of his process, for Sachs, the plywood stack itself becomes an object of devotion.
www.gagosian.com