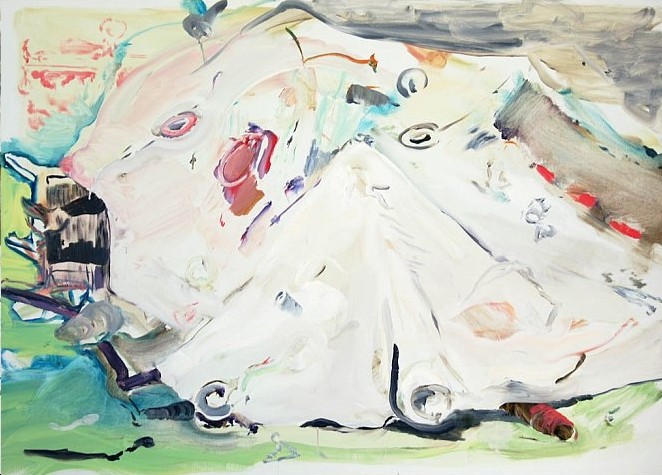 Beneath the Underdog addresses the individual's relationship to the towering vertical landscape of late capitalism, particularly within urban environments where the exaggerated scale of skyscrapers, luxury apartments and housing projects signify economic realities. Many of the works exhibited were made in the wake of Robert Moses, master builder of New York's highways, bridges and tunnels, who presided over and politically navigated a period that would forever come to symbolize the struggle between urban expansion and the increasingly uncertain place of the individual.

The introduction of more "horizontal" approaches to art making within the past 60 years may in fact be viewed as a response to a growing sense of alienation and marginalization, marked by a renewed interest in the body. The shift to the horizontal initiated by Jackson Pollock's move from the easel to the floor was literalized in Andy Warhol's Oxidation (piss) paintings, whose abject surfaces reflect the growing importance of bodily impulses. Expanding on this theme to include more recent approaches, Lowman and McEwen have selected the work of nearly 50 international artists engaged in questioning the traditional values implied by the "upright", often by investigating the physical space of the horizontal. Dysfunction and dislocation govern the uncanny groupings throughout the space, including Michael Joaquin Grey's Rodin-inspired sculpture of Balzac, overlooking Barry Le Va's entropic landscape of shattered glass, which in turn is gazed upon by a young girl painted by Gwen John (herself a student and lover of Rodin). Throughout the exhibition, the installation sequences emphasize the tension between these two orientations within the space of the gallery using painting, sculpture, and photography.

Expanding on the roles of power and tradition, Mafia (Or One Unopened Packet of Cigarettes), curated by Eivind Furnesvik, will be presented within Beneath the Underdog. This exhibition first opened at the STANDARD (OSLO) in 2006. The artists, many being shown for the first time in New York, explore the psychological space defined by an organization inseparable from violence both explicit and implied – yet which also promises protection.

*the title of this exhibition is taken from Charles Mingus' autobiography.
www.gagosian.com