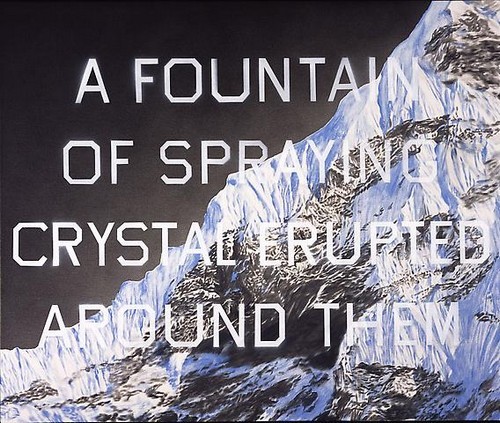 
I have used the car not only as a sexual image, but as a total metaphor for man's life in today's society.
--JG Ballard

Gagosian Gallery London will present "Crash," a major group exhibition opening on 11 February 2010, which takes its title from the famous novel by JG Ballard.

Ballard's novels stand among the most visionary, provocative literature of the twentieth century, with his ominous predictions regarding the fate of Western culture and his insights into the dark psychopathology of the human race. This exhibition is a response to the enormous impact and enduring cultural significance of his work, following his death in spring 2009. Highlighting Ballard's great passion for the surreal and his engagement with the artists of his own generation, "Crash" includes examples of his specific inspirations as well as works by contemporary artists who have, in turn, been inspired by his vision.

Ballard's first published short story "Prima Belladonna" appeared in 1956, the same year as the celebrated Independent Group's exhibition "This is Tomorrow" at the Whitechapel Gallery, which marked the birth of Pop Art in Britain. It was here, and in the work of Surrealists such as Salvador Dali and Paul Delvaux, that Ballard found the seeds of what he called a "fiction for the present day". With its dystopian depictions of the present and future, its bleak, man-made landscapes and the recounting of the psychological effects of technological, social and environmental developments on humans, his work has resonated strongly among other writers, filmmakers and visual artists. The exhibition "Crash" brings together works by artists tuned to the Ballardian universe, from his contemporaries such as Ed Ruscha, Richard Hamilton, Andy Warhol and Helmut Newton, to younger artists such as Tacita Dean, Jenny Saville, Glenn Brown and Mike Nelson.

The exhibition is organised in association with the Estate of JG Ballard.