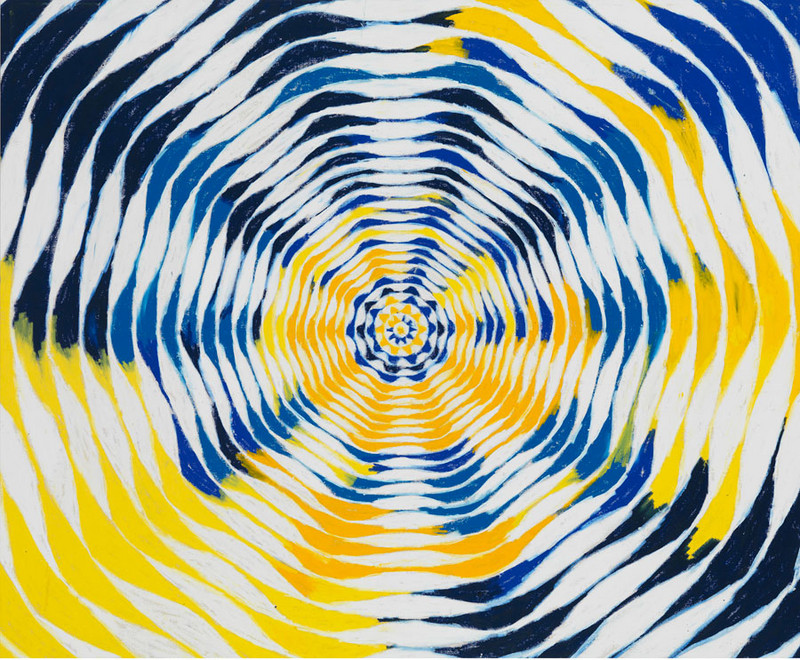 I've never really felt certain in the way things begin or end. It mostly exists in its own time and logic. More like a vision.
—Harmony Korine

“Fazor” alludes to the “phaser effect”: a musical swirl of oscillating sound that summons the hypno-psychedelic effects informing Korine's latest series of paintings. The large-scale, concentric circles that characterize this series expand upon the line and checker paintings in their embrace of vibrant color combinations. Inspired by sun motifs from the 1960s and 70s, the series conjures the Color-field paintings of Helen Frankenthaler, as well as the color spectrums of Robert Delaunay's Rhythm painting series. A combination of oilstick, acrylic, and house paint is applied to canvas or, in certain cases, reclaimed artworks from Korine's prior abstract series. The rings of each orb resemble the ripple effect, fanning out from a ten-sided star in the middle of each composition. The paintings also reveal improvisational marks, fingerprints, and inadvertent mistakes. Korine riffs on each work impulsively and embraces the physical vigor of repetition and pattern on a grand scale.

The Fazors oblige by the odd bliss of sensory assault; there is no beginning and no end to their effects. Like a tapestry at a headshop, a blazing star from MAD Magazine, or a Bridget Riley optical trance, these paintings thrive on surface tension. In Korine's figurative works, characters disappear and reemerge from a groundless terrain. Lurking ghosts and devilish characters fuse with dizzying loops at hyperspeed. Like Philip Guston's fleshy abstractions, they are animated by his loose touch. Together, the Fazors describe a world that expands and contracts like processed sound—the dream merges with the nightmare to envelop the viewer in the shimmer of the absurd.

Korine's cult films of the past twenty years—from Gummo (1997) to Spring Breakers (2012)—are uncanny insights into modern life. Their narratives confuse reality and fiction by way of partially scripted stories, montage, hand-held camerawork, and attention to the grotesque. Korine's films are experiments in suspended disbelief that cite narratives intimately related to his own biography with a sardonic twist. Improvised sequences and unplanned “mistakes” leave breadcrumbs of truth to lead viewers through a maddening reality. The films seek out “perfect nonsense,” as Korine mentioned in an interview in The Believer, “an emotional sense, rather than any kind of laid out logic or standard set of rules.”

Korine will be speaking at The British Film Institute Southbank on Wednesday, February 10, at 8:50pm in conjunction with the exhibition. Tickets can be purchased at whatson.bfi.org.uk.

Harmony Korine was born in Bolinas, California in 1973. He lives and works in Nashville, Tennessee. He has written and directed films including Gummo (1997), Julien Donkey-Boy (1999), Trash Humpers (2009), and Spring Breakers (2012). He has also collaborated extensively with director and photographer Larry Clark on films including Kids (1995) and Ken Park (2002, with Ed Lachman); and with Avi Korine on Mister Lonely (2007). Korine has generated photographs, text, drawings, paintings, and music in unconventional forms since 1998. Korine published his first novel, A Crack Up at the Race Riots, in 1998. Solo exhibitions of his films, photographs, and paintings include “Harmony Korine: Pigxote,” Vanderbilt University Fine Arts Gallery, Nashville (2009); and “Harmony Korine,” S.M.A.K, Ghent (2000). His work was included in the 50th Biennale di Venezia (2003); and the Whitney Biennial, Whitney Museum of American Art (2000).
www.gagosian.com