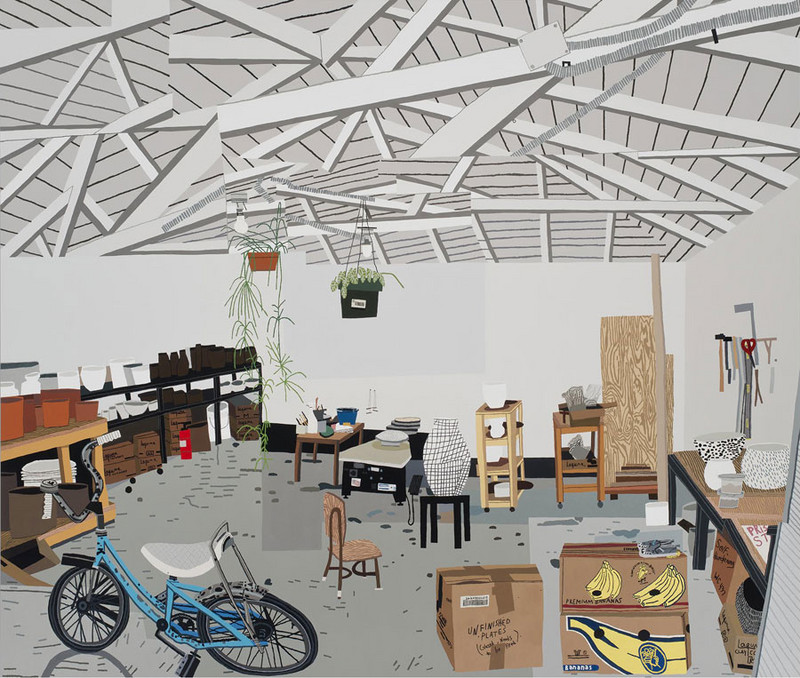 Gagosian London is pleased to present new paintings by Jonas Wood. This will be his first exhibition in London.

In his ongoing investigation of his intimate environment, Wood fuses artistic influences as diverse as the domestic interiors of Pierre Bonnard, Henri Matisse, and David Hockney to Chinese and Japanese still-life scenes, ancient pottery and the guileless textiles of Josef Frank. Sampling subjects from his own photographs, he reiterates them through an intensive process of drawing. Filling the compressed spaces of his paintings with figures, plants, and household objects, Wood reimagines the world as a variegated collage of overlapping patterns, flatly rendered. Painted outlines of pots and vases—often based on the work of his wife Shio Kusaka and fueled by their shared interest in the history of ceramics—contain landscape and interior imagery, while verdant interiors possess an affectless cut-out appearance.

Wood's images of pots all but consume the canvases on which they are painted, implying parity between painting and vessel, art and craft. He invokes a lineage of pictographic objects—from classical pots to the elaborately glazed vessels of contemporary ceramicists Michael and Magdalena Suarez Frimkess. Color, depth, and narrative are present only within the contours of Wood's depictions, which are isolated against white, grey, and black grounds. In Grey Greek Pot, schematic quotations from classical art—figures on horseback, Attic patterns—are ‘drawn’ in oil paint across the surface of a grayscale amphora; graphic leaves reminiscent of Matisse's cut-outs rise from its neck. In Wood Grain Pot with Night Bloom, most of the canvas is devoted to an intricate study of the pot's textural pattern, traversed by wilting blossoms that droop over its side. Monkey Pot borrows a decorative motif from a shower curtain in Wood's childhood home, while SK Dino Pot #1 portrays a vessel by Kusaka embellished with painted dinosaurs.

In a second group of paintings, Wood recasts interiors as surreal spaces overflowing with discordant textures and patterns. In Children's Garden, he adapts an old photograph of his childhood daycare facility—crowded with toys and characterized by yellow brick walls—into an illustrative, color-saturated scene. Resourcefully assimilating the jumble of everyday imagery into a series of heterotopic wholes, Wood continues to create nuanced reflections on the ineluctable convergences between art and life.

The exhibition is accompanied by the fully illustrated publication Jonas Wood: Pots.