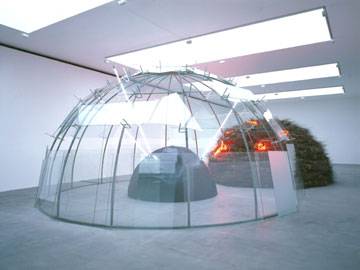 Gagosian Gallery is pleased to announce a large-scale installation by the Italian artist Mario Merz (1925 - 2003). The work, titled "8-5-3," was first shown at Kunsthaus Zurich in 1985 and it features three igloos constructed from metal and glass, covered with fragments of clamps and twigs, and linked by neon tubes. The phrase "Objet cache-toi" or ‘a hiding place' stretches across the structure in red neon lights.

In 1968 Merz produced "Giap's Igloo," the first of these archetypal dwellings that have become his signature works. Through the igloo motif Merz explores the fundamentals of human existence: shelter, nourishment and humanity's relationship to nature. He examines the lost purity of pre-industrial societies as well as the changing, nomadic identity of modern man. Merz's igloos are comprised of diverse materials including the organic and the artificial, the opaque and the transparent, the heavy and the lightweight.

The title of the exhibition, "8-5-3," corresponds to the diameter of each of the three igloos. Furthermore, it refers to the Fibonacci sequence, a mathematical series of numbers recognized in the 13th century. In this sequence, each numeral is equal to the sum of the two that precede it: 0, 1, 1, 2, 3, 5, 8, and so on. In performances and installations throughout his career Merz employed the Fibonacci sequence to represent the universal principles of creation and growth.

Mario Merz was a leading member of the Italian artistic movement Arte Povera, a term introduced in 1967 by the art critic and curator Germano Celant. The movement was marked by an anti-elitist aesthetic that promoted everyday materials in protest of the dehumanising nature of industrialisation and consumer capitalism. Other artists involved in Arte Povera include Giovanni Anselmo, Alighiero Boetti, Luciano Fabro, Jannis Kounellis, and Giuseppe Penone.

Mario Merz has exhibited at numerous museums worldwide, including at the Solomon R. Guggenheim Museum in New York where a retrospective of his work opened in 1989 and later travelled to Los Angeles Museum of Contemporary Art.