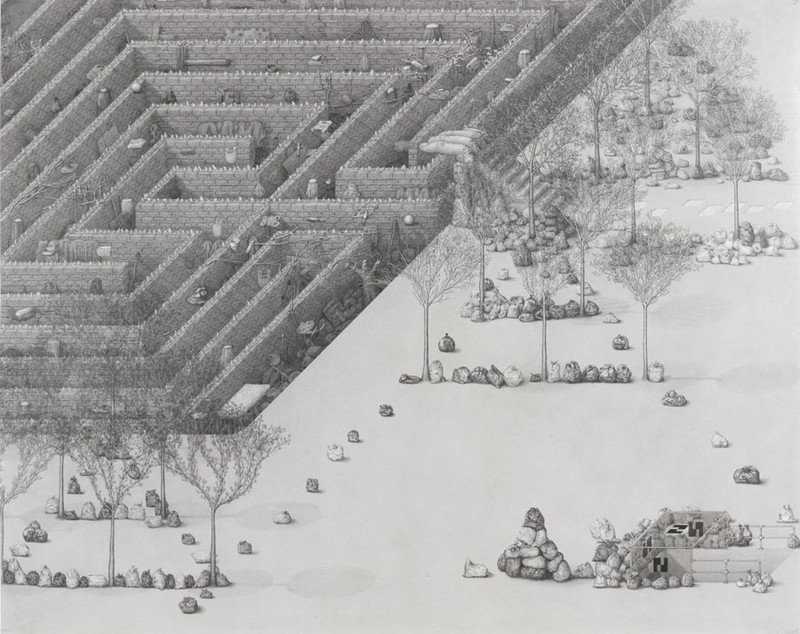 It was therefore decided to erect a civic monument on the roundabout at the outskirts of town. The monument is a large, vertical structure that spells out the friendly message “Welcome to Nobson.”
—Paul Noble

Gagosian Gallery is pleased to present “Welcome to Nobson,” an exhibition of new drawings and sculpture by Paul Noble.

The immersive drawing Welcome to Nobson (2008–10) is the penultimate work in Noble’s expansive fifteen-year Nobson project, signifying the final stage of the related pictorial and textual narratives. Just as this monumental drawing maps the passage into the world of Nobson Newtown, two towering marble sculptures, Couple (2011) and Three (2011), act as sentries that mark an entrance to the exhibition. Transcending their base connotations, these biomorphic forms serve as three-dimensional counterparts to the characters and monuments depicted in smaller drawings such as Ah (2010) and Walled Garden (2009).

The motifs illustrated in these works on paper also relate to details within Welcome to Nobson. The sturdy rectilinear brick walls of Heaven (2009), the delicate ornamental fencing in Hell (2009) and the confounding maze This Way (2010–11) are all isolated and magnified from the vast park of fantastical monuments and features in the principal drawing. References between and tautological cohesion within the epic cross-medium series underpins Noble’s concept of Nobson Newtown as its own autonomous sphere of reality.

Paul Noble (b. 1963, Dilston, Northumberland) studied at Sunderland Polytechnic and Humberside College of Higher Education. He was one of five founding members of City Racing, an influential artists’ space in London (1988–98), where he showed in 1990. Noble’s work has since been exhibited in London at Cubitt Gallery (1995), Chisenhale Gallery (1998), Tate Gallery (1999), and Whitechapel Art Gallery (2004). He has also exhibited internationally at the Albright-Knox Art Gallery, Buffalo, New York (2003); Museum Boijmans Van Beuningen, Rotterdam (2005); Migros Museum, Zurich (2005); and Gagosian Gallery, New York (2007).